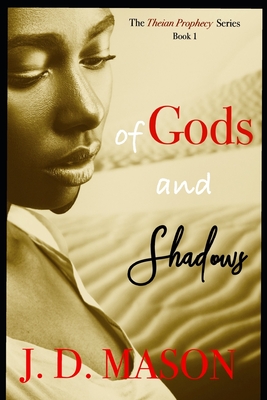 Of Gods and Shadows
by J.D. Mason

Paperback Description:
Twenty-four-year-old bartender, Eden Reid, grew up being told the kinds of stories that would give other kids nightmares. Stories of ancient beings from other worlds, living in this one disguised as humans. She heard tales of warrior princesses, dragons, winged guardians, and demons, fighting in a war, ending in the destruction of their world, Theia.In those stories, the good guys won, but only temporarily. Now, the bad guys have come back, only, they’ve come to Eden’s world to finish what was started on Theia, ushering in the apocalypse. All of a sudden, Eden is forced to play a role she wants no part of. Reincarnated from an ancient warrior, Eden has inherited the princesses destiny. To kill Sakarabru, she’ll, in essence, have to become him. Eden must bond with three Omen, elements of the demon, before she can face off with him. In her corner, is a tall, dark, and hunky Guardian and lover to her predecessor, Mkombozi. Prophet loathes Eden for being an abomination, as he puts it, of his former girlfriend but has sworn an oath to protect her at all costs. Eden is only human and the odds of surviving a bond with even one Omen is highly unlikely. But the Omen are coming for her, whether she likes it or not, and they’ll bond with her, or kill her in the process, if the demon doesn’t get to her first.

Books similiar to Of Gods and Shadows may be found in the categories below: