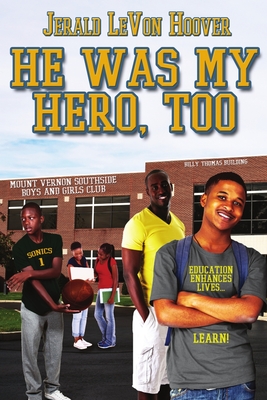 He Was My Hero, Too: The Hero Book Series 2
by Jerald LeVon Hoover

Kirby’s life changed one memorable afternoon with the murder of his best friend, Bennett. A promising life was cut short in front of a crowd of hundreds on the steps of Mount Vernon, New York’s, City Hall. Kirby had looked up to Bennett for as long as he remembered and losing him changed his life. Lost between dark thoughts of rage, regret and revenge, Kirby struggles with who he is and what he might become. Simon knew he had made mistakes few recovered from. Although an adversary of Kirby’s, watching Bennett’s murder and the impact it had on Kirby showed him not only how bad he was, but how good he might become. All he needs is a push in the right direction. Recently released from jail, Simon is determined to make amends and be a better man. Kirby and Simon’s paths are destined to clash as each try to find new identities in the wake of their difficult circumstances. Can old hatred be forgotten to allow the healing to begin? He Was My Hero, Too is the second in the acclaimed, The Hero Book Series, by author Jerald LeVon Hoover.

More books like He Was My Hero, Too: The Hero Book Series 2 may be found by selecting the categories below: