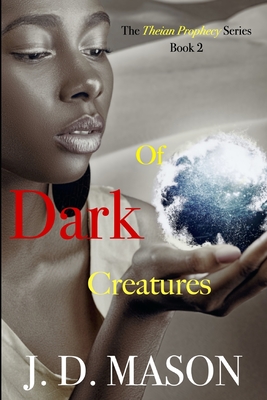 Of Dark Creatures
by J.D. Mason

Paperback Description:
Eden Reid has killed Sakarabru, defied a prophecy and against all odds, survives. With Tukufu at her side, she struggles to maintain a delicate balance between her soul and the Omen inside her. But Khale, leader of the Ancients, is more fearful than ever of this "reborn, and sees this truce between her and the evil living inside her, as a temporary lull before the inevitable end reveals itself to the detriment of, not only the world, but the universe.Sakarabru’s Brood did not die with him. The creatures, no longer considered human, wander aimlessly, without a leader or sense of purpose, and are at war with both Ancients and humans. Kifo, the Djinn who made them, riddled with guilt over the role he played in creating them, has found a solution in Paul Chapman. The most powerful Brood, Kifo sets Chapman on a course to lead this new species, in the hopes of discovering a miracle-a way to coexist with their enemies.As much as the Ancients need Eden on their side to fight against the Brood, they also fear what she will ultimately become. Eden’s only weakness is Tukufu, and Khale sees no other way but to use that weakness to her advantage, and bring the prophecy full circle once and for all.

More books like Of Dark Creatures may be found by selecting the categories below: