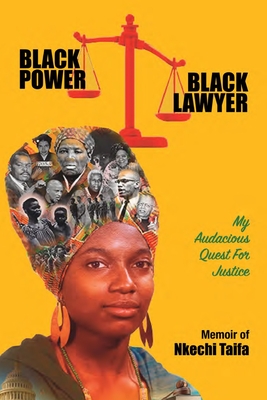 Read Our Review of Black Power, Black Lawyer: My Audacious Quest for Justice

Black Power, Black Lawyer is a memoir that stitches suspense, calamity, humor and wit into a tapestry of history, politics, law, culture and romance. Both serious and scandalous, Nkechi Taifa’s audacious quest for justice is a gripping commentary on life; the perennial nature of human resistance against oppression; and her earnest embrace of what is fair and correct. Sometimes raw, sometimes abrasive, sometimes passionate, Taifa offers her truth, unapologetically and unfiltered, with honesty and authenticity.

Her memoir is the story of a quest rarely told. The search for the resisters and the rebellious; the pursuit of issues on the cutting edge. Although there are memoirs that chronicle iconic leaders striving for justice during the civil rights era, there is scant reminiscence of the transformative journeys for self-realization of ordinary people growing up during the tumultuous Black Power era. Black Power, Black Lawyer offers a uniquely personal glimpse from an insider’s perspective into little known or understood parts of this country’s history - from juicy stories of the more controversial and militant aspects of the Black liberation struggle, to the craziness of congressional "sausage-making" and the pivotal role of "strange bedfellows."

Navigate this audacious quest with Taifa as she bears witness to ancestors, people and episodes that swayed the shaping of her identity and consciousness. No matter which vantage point she found herself - from sitting on the lap of that fine brother pulling security in the front office of the Black Panther Party; to getting arrested right after graduating from law school; to being accused of being an FBI agent; to representing the lead defendant in the Capitol Bombing case; to being detained at an airport five months pregnant as an alleged enemy of the state; to winning a six-figure settlement for clients in a pivotal employment discrimination suit against a major news media network; or to being a catalyst which sparked the change to the infamous crack cocaine laws — her quest for justice in society reigned supreme.

Taifa’s memoir is sure to awaken, inform, provoke, move and, at its best, fire you up to either join, or continue, "The Struggle!"

Books similiar to Black Power, Black Lawyer: My Audacious Quest for Justice may be found in the categories below: