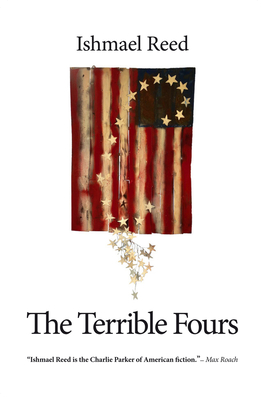 The Terrible Fours
by Ishmael Reed

Paperback Description:
When Ishmael Reed wrote The Terrible Twos about the American infantile need for instant gratification, he could not have realized that in June 2020, journalist Nicole Wallace would be referring to a president as a "toddler." Reed had parodied other genres, the gothic novel, the detective novel, the western, and the neo-slave narrative, a term that he coined in 1984, and which began a big academic payroll as it was included in syllabi nation-wide. From his first novel, The Free-Lance Pallbearers, Afro-Futurist before the critical term existed, Ishmael Reed has reshaped traditional forms and extended them. As a Jazz pianist, who has performed in clubs and even in a palace in Italy, he compares it to taking clich chords and re-harmonizing them.

The Terrible Fours follows The Terrible Twos (1982) and The Terrible Threes (1989). It is part science fiction, part Washington Novel (Think Drew Pearson’s novel, The Senator, films Seven Days In May and The Manchurian Candidate) and part Christmas Novel. Some characters have been dropped and some of the principals are back. St. Nicholas is here, but his sidekick Black Peter is missing. Dean Clift, the president who was removed from office, still resides in a Maryland sanatorium. Televangelist Clement Jones still runs the White House. "The Rapture" that Jones and the figurehead president Jesse Hatch promised hasn’t arrived.

The citizens of the planet Dido await an invasion from earth and their planet, an alien in the body of a deceased television producer, works inside the government and attempts to disrupt the invasion. Termite Control, a follower of Odin and a necrophiliac who was dismissed as a political threat in The Terrible Threes, is gaining in the polls, and more and more and more. Reviewing The Terrible Twos, the late John Leonard wrote in The New York Times: "Mr. Reed is as close as we are likely to get to a Garcia Marquez, elaborating his own mythology even as he trashes ours."

Books similiar to The Terrible Fours may be found in the categories below: