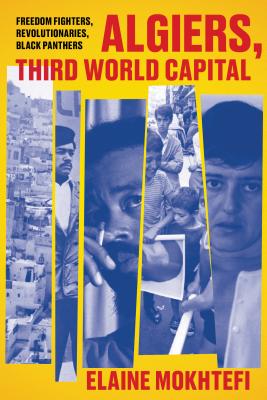 Book Description:
A fascinating portrait of life with the Black Panthers in Algiers: a story of liberation and radical politics

Following the Algerian war for independence and the defeat of France in 1962, Algiers became the liberation capital of the Third World. Elaine Mokhtefi, a young American woman immersed in the struggle and working with leaders of the Algerian Revolution, found a home here. A journalist and translator, she lived among guerrillas, revolutionaries, exiles, and visionaries, witnessing historical political formations and present at the filming of The Battle of Algiers.

Mokhtefi crossed paths with some of the era’s brightest stars: Frantz Fanon, Stokely Carmichael, Timothy Leary, Ahmed Ben Bella, Jomo Kenyatta, and Eldridge Cleaver. She was instrumental in the establishment of the International Section of the Black Panther Party in Algiers and close at hand as the group became involved in intrigue, murder, and international hijackings. She traveled with the Panthers and organized Cleaver’s clandestine departure for France. Algiers, Third World Capital is an unforgettable story of an era of passion and promise.

More books like Algiers, Third World Capital: Freedom Fighters, Revolutionaries, Black Panthers may be found by selecting the categories below:

Tell us what do you think about Algiers, Third World Capital: Freedom Fighters, Revolutionaries, Black Panthers.