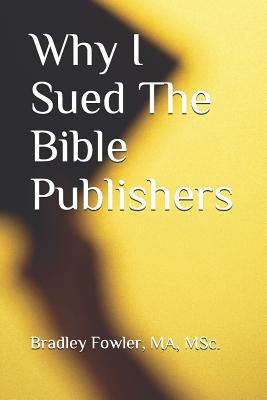 Why I Sued the Bible Publishers
by Bradley Fowler

Read Our Review of Why I Sued the Bible Publishers

Since filing his initial civil suit against three world-respected Bible publishers, i.e. Zondervan Publishing, L.L.C. Thomas Nelson, and William Tyndale Publishers, in 2009. Bradley has invested eight-years, researching and studying to understand the use of hermeneutics, a branch of knowledge dealing with interpretation of scholarly work, commonly utilized by Bible scholars.

In 2009, when Bradley attended Florida Institute of Technology he was required to complete a course in religious studies; doing so enabled Bradley to learn how variation of terminology, Bible publishers utilize in an effort to discriminate against, homosexuals, in the many Bibles published since 1982.

Bradley conveys that each Bible publisher has willfully integrated bias towards homosexuals, men who sleep with men, and/or male prostitutes in the Bible, without concerning themselves about what the Bible actually teaches about interpretation of Biblical content.

Additionally, Bradley learned that the term-homosexual, wasn’t coined until the 19th Century, by German Psychologist, Karoly Maria Benkert. Learning this evoked Bradley to investigate, how today’s Bible publishers could convey that homosexuals would not inherit the Kingdom of God, in the countless Bibles, they edit and publish.

Bradley also points out that passages in I Corinthians 2:14, teach that the natural man doesn’t understand the things of God, nor can he know them because they are spiritually discerned. Yet, each Bible publisher sued published passages in the Bibles published between 1982-2015, discriminating against homosexuals, causing such persons to be victimized, taunted, and/or murdered internationally.

Thus, Bradley believes this new book entitled Why I Sued The Bible Publishers, will empower Christians and enable them to better understand, why Bible publishers are revising biblical texts, to not only convey what they believe the Bible should say. Bradley shared scholarly research explaining why bible publisher’s use of hermeneutics is misleading Christians away from the faith and discombobulating Christians about what the Bible actually teaches.

Bradley stresses, Christians should take a sincere interest in studying the Bible, beyond their neighborhood ministers, reverends, and Bishops, and enroll in scholarly courses that better educate religious practitioners about the history of Christianity, who established the Church, why the Church was foundered, and when Christianity was given power to exist.

Bradley believes, Christians will gain a substantial amount of education about biblical passages.

Books similiar to Why I Sued the Bible Publishers may be found in the categories below: