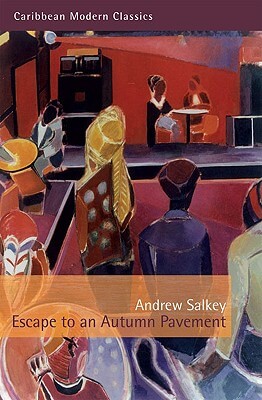 Escape to an Autumn Pavement
by Andrew Salkey

Book Description:
A brave and pioneering treatment of sexual identity in Caribbean literature, this novel, first published in 1960, follows the fortunes of Johnnie Sobert, a Jamaican exile who works in London at a club that caters to black American servicemen. In flight from his dominant, possessive mother, he immerses himself in the bohemian Soho scene and adopts a wisecracking persona as a cover for his deep-seated insecurities. Adding to Johnnie’s confusion is the fact that when he is not at work, he navigates a completely different life in Hempstead, where he lives in a bedsitter and carries on an unsatisfying affair with his white landlady, Fiona. These two worlds provide a lively portrait of Britons reacting to the growing presence of blacks and Asians in their neighborhoods, and Johnnie takes lessons from each place. By the time he finally decides to move in with his gay friend, Dick, he is much better equipped with self-awareness?but he has yet to make a decision about where his desires truly lie.

More books like Escape to an Autumn Pavement may be found by selecting the categories below:

Tell us what do you think about Escape to an Autumn Pavement.