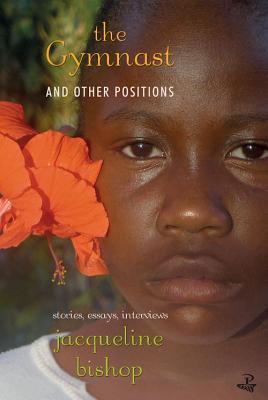 The Gymnast and Other Positions: Stories, Essays, Interviews
by Jacqueline Bishop

Book Description:
Beginning with the promptings of the transgressively erotic title story, Jacqueline Bishop came to see the hybrid format of this book, with its mix of short stories, essays and interviews could begin to encompass her desire to see where she had arrived at in a creative career that encompassed being published as a novelist, poet, critic and exhibited as an artist. How did these sundry positions connect together? What aspects of both conscious intention and unconscious, interior motivations did they reveal? The stories, none more than a few pages long, can be read at several levels. The mentor who teaches the child gymnast a contortionist’s erotic positions, the adoptive mother who shoots down ex-partner and adopted child when the former debauches the latter as the subject of pornographic photographs; the relationship between tattooist and the woman who offers her naked body for decoration are all sharply and persuasively realized as short fictions, but they also hint at a writer’s interior dialogue and can be read as parables about the relationship between the free imagination and the controlling and even potentially betraying power of art. The essays explore more conscious areas of expression. They deal with the experiences of maternal separation, family histories and mythologies, the search for grounding in the life of a Jamaican grandmother, the relationship with a male writing mentor, travel to Morocco, the inspiration of the writing lives of Jamaicans Claude McKay and Roger Mais and how 9/11 showed her how deeply she had become a New Yorker. The interviews, which investigate sometimes her writing, sometimes her art, and occasionally both, provide context for the stories and the essays. They are at their most revealing when interviewers ask Jacqueline Bishop questions she hasn’t asked herself.

More books like The Gymnast and Other Positions: Stories, Essays, Interviews may be found by selecting the categories below:

Tell us what do you think about The Gymnast and Other Positions: Stories, Essays, Interviews.