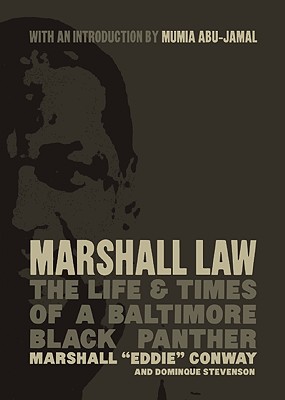 Marshall Law: The Life & Times of a Baltimore Black Panther
by Eddie Conway

Paperback Description:
Marshall “Eddie” Conway is a former member of the Baltimore chapter of the Black Panther Party. In 1969, he uncovered evidence of the FBI’s infiltration of the Panthers as a part of the COINTELPRO initiative, and found himself locked away one year later, convicted of a murder he did not commit. Currently into his forth decade of incarceration in a Maryland correctional facility, he has played a leading role in a variety of prisoner support initiatives, including the formation of the Maryland chapter of the United Prisoner’s Labor Union, and the ACLU’s Prison Committee to Correct Prison Conditions as well as the American Friends Service Committee’s A Friend of a Friend program. Mr. Conway is the author of two books, The Greatest Threat: The Black Panther Party and COINTELPRO, and his memoir, Marshall Law: The Life and Times of a Baltimore Black Panther. He has a Bachelor’s Degree in Social Science from Coppin State University. Dominque Demetrea Stevenson is the mother of four children. An activist who speaks extensively about political prisoners and the prison industrial complex, she is currently the director of the Maryland Peace with Justice Program of the Middle Atlantic Region of the American Friends Service Committee in Baltimore, Maryland. She coordinates prisoner run mentoring projects in Maryland prisons. The program, A Friend of a Friend, helps foster healing, and connects young men with prison mentors who help them develop the skills necessary to navigate violent situations, and prepare for a successful return to their communities. She is the co-author of Marshall Law: The Life and Times of a Baltimore Black Panther, and has written a novel, Blues Before Sunrise. Dominque currently resides in Baltimore, Maryland.

Books similiar to Marshall Law: The Life & Times of a Baltimore Black Panther may be found in the categories below: