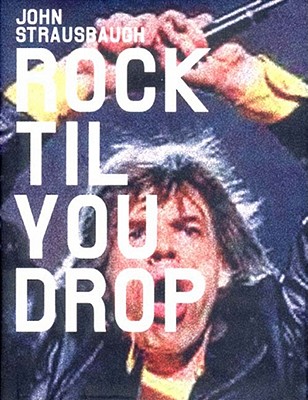 Rock ’Til You Drop: The Decline from Rebellion to Nostalgia
by John Strausbaugh

Book Description:
In the 1960s and early 70s rock and rebellion went arm in arm. This was the generation that angrily refused to grow up, to settle down. The Who captured the zeitgeist with precision: I hope I die before I get old.’

Yet, thirty years later, many of the icons of rock and roll’s angry childhood are not only still alive but continue to haul themselves up on stage, limping through old standards with performances that have lost all edge and meaning. As the grizzled old men of Crosby, Stills, Nash & Young undertake yet another tour, Cher makes her umpteenth comeback, and Yes grind out their old standards to punters at gambling resorts, John Strausbaugh reflects acidly on the declining charm of colostomy rock.

Strausbaugh interleaves acute reflections by commentators such as Ellen Willis, and legendary figures such as John Sinclair (manager of the notorious MC5) and Tuli Kupferberg of the Fugs, with his own take on the business of rock and roll. Intemperate and savvy, he rails at the timidity of Rolling Stone s hipster capitalism, the sterility of the Rock and Roll Hall of Fame, and the appalling prospect of the Stones heading out on the road again after live appearances that were dubbed the Steel Wheelchairs’ tour. He talks to the engaging Giorgio Gromelsky, manager of the Yardbirds, about the early days of rock and roll in London, and to Soul Coughing founder Mike Doughty about how a younger generation of musicians see the business today.

Impassioned and opnionated, Rock Til You Drop is a rousing indictment of a musical generation which started out with pretensions to be world changers and ended up merely as short-changers of their original ideals. The publishers disclaim responsibility for any further medical deterioration of aging rock and rollers who read this book.

More books like Rock ’Til You Drop: The Decline from Rebellion to Nostalgia may be found by selecting the categories below: