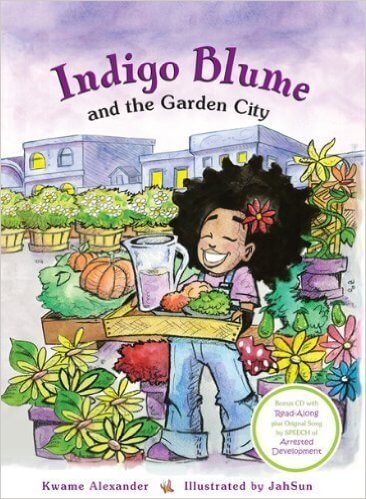 Indigo Blume And The Garden City
by Kwame Alexander

Book Description:
Indigo Blume and the Garden City received a 2013 NAACP Image Award Nomination for Outstanding Children’s Literature. Indigo Blume is a nine-year old girl who lives in the fictional city of Garden City. She decides to enter a "Go Green" contest, even though her friends won’t help her with her big idea: A Rooftop Garden. In the end, she is successful at cleaning up her community and building a garden with climbing beans so tall they almost touch the stars. A "Green" glossary is included, as well as a Read Aloud CD with a special song written and performed by SPEECH of ARRESTED DEVELOPMENT.

Tell us what do you think about Indigo Blume And The Garden City.