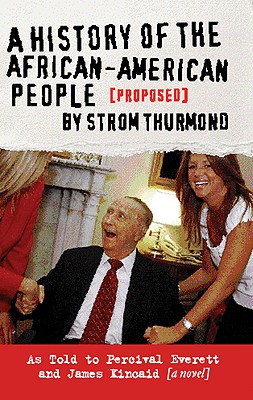 ?If Percival Everett isn’t already a household name, it’s because people are more interested in politics than truth.”?Madison Smartt Bell, author of The Washington Square Ensemble

?Everett’s talent is multifaceted, sparked by a satiric brilliance that could place him alongside Richard Wright and Ralph Ellison . . .”?Publishers Weekly

?I think Percival Everett is a genius. I’ve been a fan since his first novel. He continues to amaze me with each novel?as if he likes making 90-degree turns to see what’s around the corner, and then over the edge . . . He’s a brilliant writer and so damn smart I envy him.”?Terry McMillan, author of Mama

A fictitious and satirical chronicle of South Carolina Senator Strom Thurmond’s desire to pen a history of African-Americans?his and his aides’ belief being that he has done as much, or more, than any American to shape that history. An epistolary novel, The History follows the letters of loose cannon Congressional office workers, insane interns at a large New York publishing house and disturbed publishing executives, along with homicidal rival editors, kindly family friends, and an aspiring author named Septic. Strom Thurmond appears charming and open, mad and sure of his place in American history.

Percival Everett is the author of 15 works of fiction, among them Glyph, Watershed and Frenzy. His most recent novel, Erasure, won the Hurston/Wright Legacy Award and did little to earn him friends.

James Kincaid is an English professor at the University of Southern California and has written seven books in literary theory and cultural studies. These books and Kincaid himself have gradually lost their moorings in the academic world, so there was nothing left for him to do but to adopt the guise of fiction writer. Writing about madness comes easy to him.

More books like A History of the African-American People (Proposed) may be found by selecting the categories below:

Tell us what do you think about A History of the African-American People (Proposed).