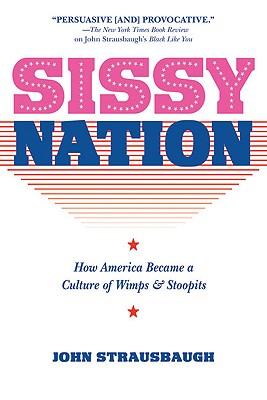 Sissy Nation: How America Became a Culture of Wimps & Stoopits
by John Strausbaugh

Book Description:
Praised by the New York Times Book Review for being ?persuasive [and] provocative,” this commentary reveals in furious, funny, and ferocious strokes how Americans became sissified, soft, and scared?and offers unforgettable solutions on how to snap out of it. The American Sissy cocoons in a safe, virtual world?Fundadome. He plays with online friendsters and he plays with himself, anything to abate the pall of anxiety hanging over his head about everything from terrorists to spinach to air and sunshine. He votes for sissy leaders who bully the world?sissies in tough-guy drag. He’s so afraid of death and illness, he doesn’t really live?he overmedicates himself and overprotects his kids. And he’s so busy preoccupied with the lives of the rich and famous that he forgets all about having a fulfilled life of his own. Strausbaugh leaves no sacred cow untipped. He is as nonpartisan as he is straight shooting, taking equal aim at Democrats and Republicans, gays and straights, PETA fanatics, and the Christian right. But all is not lost. Sissy Nation offers "modest proposals" for getting back the gumption that made this culture great.

More books like Sissy Nation: How America Became a Culture of Wimps & Stoopits may be found by selecting the categories below: