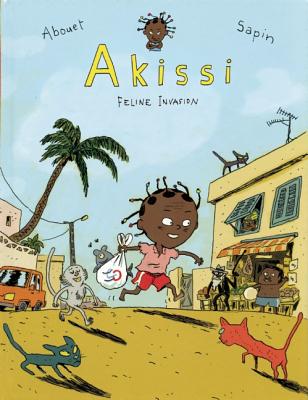 Hardcover Description:
Poor Akissi! The neighborhood cats are pursuing her to steal her fish, her little monkey Boubou almost ends up in a frying pan, and she’s nothing but a pest to her older brother Fofana, but Akissi is a true adventurer, full of silliness and fun, and nothing will scare her for long!Part of the Sélection Officielle d’Angoul me 2011 Prize at Europe’s largest comics festival.By the author of the critically acclaimed and hugely successful series Aya, with two hundred fifty thousand copies sold in France, translated into fifteen languages. Three books in the series have already been released in French, with a fourth currently in the pipelines.Marguerite Abouet was born in Abidjan, Ivory Coast, in 1971. At the age of twelve, her parents sent her to live with her uncle in Paris in order to pursue her education. Following the tremendous success of her comic Aya de Yopougon, Marguerite is now dedicating all of her time to writing. She’s also the director of a charity that she created to help children in Africa get better access to books.Mathieu Sapin was born in Dijon, France, in 1974. He studied at l’Ecole supérieure des Arts Décoratifs de Strasbourg before becoming a renowned illustrator for children’s magazines and publishers in France. He’s also the author of a comic for adults called Supermurgeman.

More books like Akissi: Feline Invasion may be found by selecting the categories below: