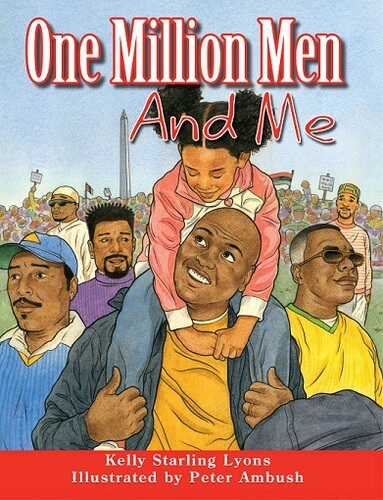 One Million Men And Me
by Kelly Starling Lyons, Illustrated by Peter Ambush

Paperback Description:On October 16, 1995, Black men of all ages, religions and backgrounds gathered at the Lincoln Memorial in Washington, D.C. They were there on a mission - to mobilize and motivate, as part of what would become the largest event of its kind in U.S. history: the Million Man March. The Million Man March was a movement like no other. It brought together Black men who were committed to inspiring and empowering themselves and each other to make positive and lasting changes in their families and communities. The March was widely covered by news media across the country and the world. Now, this new picture book shares the story of the March in a new light: through the eyes of a little girl who was with her father the day Black men made history.

This engaging book celebrates that historic event with a little girl who shares it with her father!