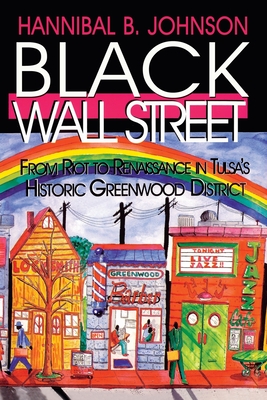 Black Wall Street: From Riot to Renaissance in Tulsa’s Historic Greenwood District
by Hannibal B. Johnson

The alleged assault of a white woman by a black man triggered unprecedented civil unrest. The worst riot in American history, the Tulsa Race Massacre of 1921, destroyed people, property, hopes, and dreams. The Greenwood District burned to the ground, only to be rebuilt from the ashes, bigger and better than ever. By 1942, some 242 businesses call the Greenwood District home. Having experienced decline in the ’60s — early ’80s, the area is now poised for yet another renaissance.

More books like Black Wall Street: From Riot to Renaissance in Tulsa’s Historic Greenwood District may be found by selecting the categories below: