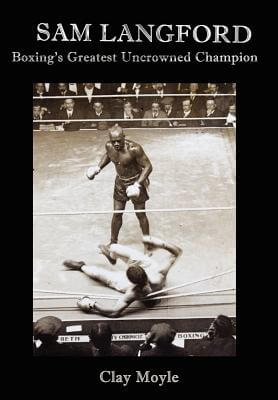 Book Description:
Standing no more than five-feet, seven-inches; tall, Sam Langford was one of the 20th century’s greatest fighters. In this biography, his life story is told in great and entertaining detail. Over 100 photographs are included. Sam was a great black prizefighter in an era when the color line was easily cited by white opponents wanting to avoid meeting him in the ring. Ring magazine editor Nat Fleischer ranked Langford among his favorites, stating, ’Sam was endowed with everything. He possessed strength, agility, cleverness, hitting power, a good thinking cap and an abundance of courage. He feared no one. But he had the fatal gift of being too good, and that’s why he often had to give away weight in early days and make agreements with opponents. Many of those who agreed to fight him, especially of his own race, wanted an assurance that he would be merciful or insisted on a bout of not more than six rounds.’ This biography brings to light Sam Langford’s remarkable talents and life.

More books like Sam Langford: Boxing’s Greatest Uncrowned Champion may be found by selecting the categories below: