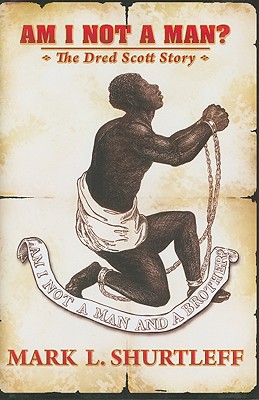 Am I Not A Man? The Dred Scott Story
by Mark L. Shurtleff

Book Description:
An illiterate slave, Dred Scott trusted in an all-white, slave-owning jury to declare him free. But after briefly experiencing the glory of freedom and manhood, a new state Supreme Court ordered the cold steel of the shackles to be closed again around his wrists and ankles. Falling to his knees, Dred cried, "Ain’t I a man?" Dred answered his own question by rising and taking his fight to the U.S. Supreme Court.

Dred ultimately lost his epic battle when the Chief Justice declared that a black man was so inferior that he had "no rights a white man was bound to respect."

Dred died not knowing that his undying courage led directly to the election of President Abraham Lincoln and the emancipation proclamation.

Dred Scott’s inspiring and compelling true story of adventure, courage, love, hatred, and friendship parallels the history of this nation from the long night of slavery to the narrow crack in the door that would ultimately lead to freedom and equality for all men.

More books like Am I Not A Man? The Dred Scott Story may be found by selecting the categories below: