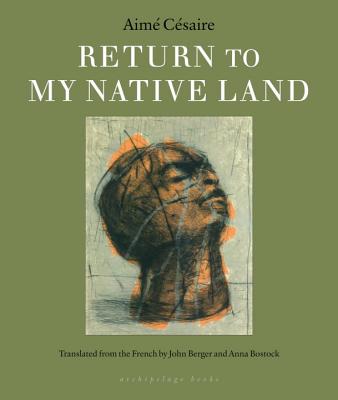 Return to my Native Land
by Aimé Césaire

Paperback Description:
A work of immense cultural significance and beauty, this long poem became an anthem for the African diaspora and the birth of the Negritude movement. With unusual juxtapositions of object and metaphor, a bouquet of language-play, and deeply resonant rhythms, C saire considered this work a "break into the forbidden," at once a cry of rebellion and a celebration of black identity.

"The greatest living poet in the French language."—American Book Review

"Martinique poet Aime Cesaire is one of the few pure surrealists alive today. By this I mean that his work has never compromised its wild universe of double meanings, stretched syntax, and unexpected imagery. This long poem was written at the end of World War II and became an anthem for many blacks around the world. Eshleman and Smith have revised their original 1983 translations and given it additional power by presenting Cesaire’s unique voice as testament to a world reduced in size by catastrophic events." —Bloomsbury Review

"Through his universal call for the respect of human dignity, consciousness and responsibility, he will remain a symbol of hope for all oppressed peoples." —Nicolas Sarkozy

"Evocative and thoughtful, touching on human aspiration far beyond the scale of its specific concerns with Cesaire’s native land - Martinique." —The Times

More books like Return to my Native Land may be found by selecting the categories below: