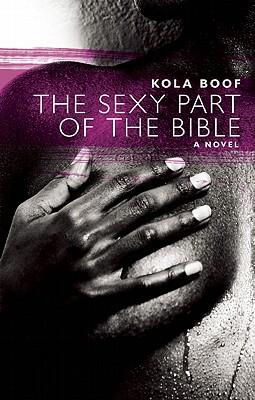 "The most jubilant celebration of black African beauty so far seen in the English language."
—Madison Smartt Bell, Boston Globe

Following in the footsteps of her idols Alice Walker and Toni Morrison, Kola Boof asserts her own literary prowess with a chilling sociopolitical love story.

Set in modern West Africa, Europe, and the United States, and featuring the kind of heroine readers rarely get to encounter in popular culture—beautiful charcoal-skinned Eternity, a spirited and diabolical young African hellcat whose life is stigmatized by a heart-stopping secret—The Sexy Part of the Bible is an erotically astute novel filled with mystery and adventure.

Enveloped in the arms of a domineering Fela Kuti type rap star and revolutionary named Sea Horse Twee, Eternity finds herself miraculously surviving several African rebellions—and in the interim, she powerfully unmasks the science of cloning, which becomes a powerful metaphor in the story.

Kola Boof is the author of several novels and poetry collections, including Flesh and the Devil and Nile River Woman. Her writing has appeared in Harper’s and the story collection Politically Inspired. Her autobiography, Diary of a Lost Girl, was published in 2006. She has been interviewed by MSNBC, FOX News, and CNN and has been featured in TV Guide, Time, New York Post, and The New York Times. She lives in southern California.

Books similiar to The Sexy Part of the Bible (Akashic Urban Surreal Series) may be found in the categories below: