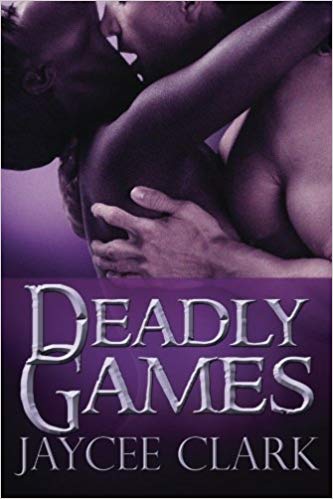 “Deadly Games is a spine-tingling, thrilling ride that readers will devour in one sitting… This is Ian’s story, and what a story it is.” —Sinclair Reid, Romance Reviews Today

The stakes are higher …the risks are steeper … the chances are more fatal … The Raven is as dark and mysterious as her name, a shadowy assassin who now sells the skills she learned in British Intelligence to the highest bidder. But even killers have a code of honor, and when the facts of her latest assignment don’t add up, she delves deeper into the life of the man she’s supposed to kill before her next hit becomes her biggest mistake.

Ian Kinncaid, undercover agent and master of disguise, has been estranged from his family for well over a decade. Working in a world more sinister than even he could have imagined, his deep cover gets blown and he urgently needs a place to hide the young girl he rescued from the Czech underground. With threats closing in from every direction and the family he walked away from now at risk, his only hope is to persuade the most unlikely woman to be his ally. Shocked by what she learns and horrified by what she witnesses, the Raven fights every instinct and turns against her employer to help Ian. Suddenly thrown back into a world she had hoped to leave behind, she must trust Ian and the feelings he stirs in her to fight a sadistic crime lord before everything they know and love is destroyed.

Tell us what do you think about Deadly Games (Kinncaid Brothers, Vol. 4).