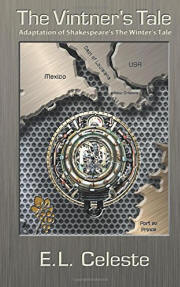 The Vintner’s Tale: Adaptation of Shakespeare’s The Winter’s Tale
by Claudia Alexander

It is 1892. Queen Victoria is on the English throne. But the American civil war was never fought, and the Louisiana Purchase was never made. English-speaking USA shares the North American continent with French Louisiana, and Spanish Mexico. In Haiti, ever slavery-free, Mr Camillo “Cam” Deuberry, a vintner by trade, and wine concierge to the king, longs to be free of his tyrannical boss Leontes (Leo). Leo is not only cacique of the small island, an historical cultural title descended from its original Native American inhabitants, but also King. When Leo threatens the life of the Governor-General of Louisiana, Deuberry suspects voodoo is involved. But when, in a fit of rage, Leo orders Cam to do it, Cam is faced with a stark choice, follow his king in a mad, paranoid dream, or risk his freedom, travel to the slave-holding USA, and take up residence in New Orleans. Leo’s rage doesn’t stop with the Governor-General of Louisiana. Leo next sets his sights on his pregnant, mulatto wife, and draws more of his closest advisors into his murderous schemes. Voodoo priestess, Paulina, must use all her skill not only to unearth the sorcerous scourge that has set all the rage in motion, but find a possible solution. Paulina’s husband, must face the character defining choices of murdering a child, abandoning his wife, or disobeying a direct order from his king. A steampunk adaptation of Shakespeare’s The Winter’s Tale, a family story that spans twenty years, set in Haiti and New Orleans in 1892.