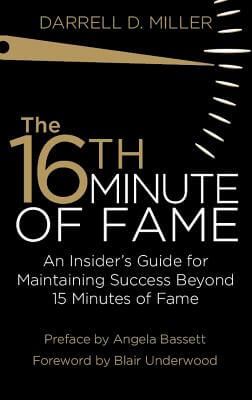 The 16th Minute of Fame: An Insider’s Guide for Maintaining Success Beyond 15 Minutes of Fame
by Darrell Miller

Paperback Description:
In the future, everyone will be world-famous for 15 minutes. Andy Warhol coined that prophetic line in 1968. Ironically, in today’s modern society, Warhol’s statement is arguably more famous than its author. Forty-plus years after he made his seemingly outrageous pronouncement, most people would probably agree that his prediction appears to have in fact, come true. It has become possible, in large part, due to the vast audiences of hundreds of channels of scripted television and unscripted reality TV shows, the new media digital revolution dominated by YouTube, Facebook, Twitter, Instagram, countless blogs and seemingly infinite legions of websites. Author Darrell Miller characterizes fame as that defining point in your life or career-whether you are a celebrity or not-that has the potential and capacity to actually take you to a higher level of success and to reach your personal or business goals. Throughout his career as an entertainment attorney, the author has observed many celebrity artists, athletes and other high profile people who have achieved or exceeded their financial and personal dreams. As an entertainment attorney in Los Angeles, he has worked with or studied many non-celebrities who became instantly famous as a result of being on reality TV, winning a lottery or getting a big promotion at their job. Miller’s primary goal is to make people stop and give real consideration to some of these issues in an effort to motivate them to understand that once they have reached a certain level of fame and fortune, it is extremely important to spend quality time, energy and research on developing basic plans and strategies in order to sustain their success. As Mr. Miller writes, there are serious perils to blindly embracing and enjoying the fleeting fun of celebrity fame and fast money. The tabloids, newspapers, blogs and social media are littered with the ruins of shooting stars-celebrities, politicians, sports figures and executives-all have come and gone in the blink of the public’s eye. The concept driving The 16th Minute of Fame is that it is vital to avoid embracing the superficial, popularized concept of fame. The core theme explored in this book will largely center on how a person can achieve and sustain fame in the entertainment industry. However, the issues of fame, fortune and success are universal, and they inevitably affect most professions. Miller uses the entertainment industry as the backdrop for much of the discussions in this book because that is the industry that he knows best. However, the information presented will also be directly applicable to most non-entertainment related athletes, professionals, business owners and entrepreneurs who are pursuing goals to advance their personal life and/or business.

Books similiar to The 16th Minute of Fame: An Insider’s Guide for Maintaining Success Beyond 15 Minutes of Fame may be found in the categories below: