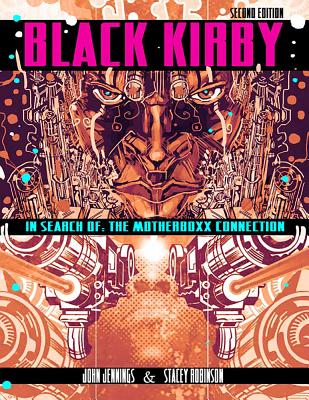 Black Kirby: In Search of the MotherBoxx Connection
by John Jennings and Stacey Robinson

Paperback Description:
A catalog of primarily visual artworks-on-paper, this collection is the work of a creative duo that makes up the collaborative entity, Black Kirby. Their art celebrates the groundbreaking work of legendary comic creator Jack Kirby and functions as a highly syncretic mytho-poetic framework by appropriating Kirby’s bold forms and revolutionary ideas combined with themes centered on AfroFuturism, social justice, Black history, media criticism, science fiction, magical realism, and the utilization of Hip Hop culture as a methodology for creating visual expression. Their work also focuses on the digital medium: how its inherent affordances offer much more flexibility in the expression of visual communication and what that means in its production and consumption in the public sphere. In a sense, Black Kirby appropriates the gallery as a conceptual crossroads to examine identity as a socialized concept, and to show the commonalities between Black comics creators and Jewish comics creators and how both utilize the medium of comics as space of resistance. The duo attempts to re-medicate blackness and other identity contexts as sublime technologies that produce experiences that can limit human progress and possibility.

More books like Black Kirby: In Search of the MotherBoxx Connection may be found by selecting the categories below: