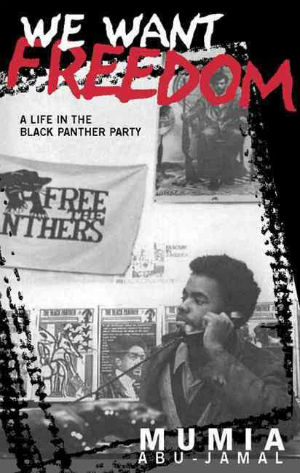 We Want Freedom
by Mumia Abu-Jamal

Book Description:
Mumia Abu-Jamal, America’s most famous political prisoner, is internationally known for his “live from death row” radio broadcasts and writings. In his youth, he helped found the Philadelphia branch of the Black Panther Party, wrote for the national newspaper, and began his lifelong work of exposing the violence of the state as it manifests in entrenched poverty, endemic racism, and unending police brutality. We Want Freedom combines Mumia’s memories of day-to-day life in the Party with analysis of the history of Black liberation struggles. Applying his poetic voice and unsparing critical gaze, Mumia constructs a vivid and compelling picture of the Black Panther Party and its legacy, focusing on the ordinary men and women who were the Party, as much as on the leadership. As calls that Black lives matter grow louder, Mumia connects the historical dots between contemporary struggles and the Panthers’ demand for the “immediate end to police brutality and the murder of Black people.” By locating the Black Panthers in a struggle centuries old, and in the personal memories of a young man, Mumia Abu-Jamal helps us to understand—and to demand—freedom. “A moving, incisive, and thorough history of the Black Panther Party. This book is required reading for anyone who would seek to understand race, revolution, and repression in the United States.” —Amy Goodman, journalist and host of Democracy Now! “An urgent exposition of the long history of the Black Radical Tradition. Rich in historical detail and still attuned to ongoing contemporary discussions concerning Black liberation, We Want Freedom provides a new generation of activists, radicals, and revolutionaries with the politics and clarity necessary to sustain today’s movement.” —Keeanga-Yamahtta Taylor, author of From #BlackLivesMatter to Black Liberation “Writing eloquently from his prison cell, Mumia Abu-Jamal gives us a fascinating and unusual history of the Black Panther Party. An invaluable addition to anyone’s reading list.” —Howard Zinn, author of A People’s History of the United States “Mumia Abu-Jamal is one of the most important public intellectuals of our time.” —Angela Y. Davis, author of Freedom Is a Constant Struggle “Writing from the barren confines of his death row cell, Mumia Abu-Jamal provides a remarkable testament about the Black Panther Party. He has poured his energy into an amazing book that illuminates the truth of what his membership in the Party was about, and reveals the extreme price extracted from him for having learned, and for now telling the truth.” —Kathleen Cleaver, from the introduction

More books like We Want Freedom may be found by selecting the categories below:

Tell us what do you think about We Want Freedom.