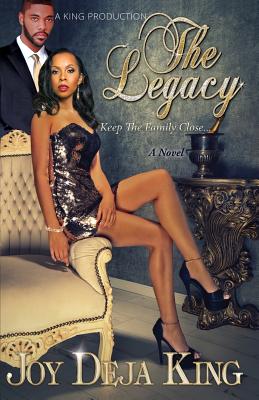 The Legacy…: Keep the Family Close
by Joy Deja King

Book Description:
The Legacy introduces you to the very prominent yet deadly, Collins Family. Allen Collins is the head of the drug empire and he grooms both his sons to control it with him. He wants to create a legacy for his family that will continue on from generation to generation. But in Allen’s quest to leave a legacy, he has to first survive his biggest competition, which is the Hernandez family. Allen also has to make sure that he keeps certain politicians, judges and police officers in his back pocket. But Allen’s wife Karmen, might turn out to be his most fatal opponent when she eventually grows tired of being his dutiful wife and learns about his mistress.Besides Allen trying to keep his wife loyal he also has to play peacemaker to his sons Clayton and Kasir. The men are complete opposites and constantly butt heads over their different styles on how to run the family business.Finally, there is Allen’s daughter Ashton that he absolutely adores. Ashton has the beauty of her mother but a mind to destroy like her father. The Legacy will follow the rise of the Collins Family to greatness and how they have to fight to remain united so they won’t fall.

More books like The Legacy…: Keep the Family Close may be found by selecting the categories below: