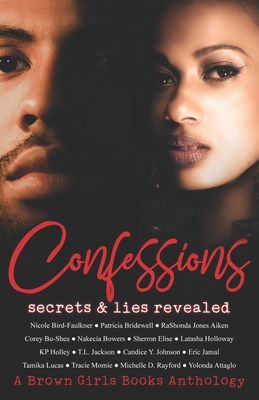 Confessions: Secrets & Lies Revealed
by Patricia A. Bridewell, Michelle D. Rayford, and 13 others

Confession is good for the soul….or is it? Secrets have a way of festering inside of us. Sometimes we release them, sometimes they find their way out. Most the time, they come with a whole set of problems. In this tantalizing compilation of stories, fifteen talented writers explore what happens when secrets and lies are revealed. From Nicole Bird-Faulkner’s story about a woman whose fear of marriage sends her running into the arms of her ex…..to Eric Jamal’s story about a man who can’t let go of the love of his life….to Nakecia Bower’s tale about a scorned wife ready to exact revenge on a celebrity….to Corey Bu-Shea’s story about an NBA athlete whose whole life is upended by a devastating secret…to Tamika Lucas’ story about a woman whose husband reveals he wants a divorce, just as she’s about to tell him she won the lottery…these riveting stories will have you clamoring for more as they show the best - and the worst - of what happens when secrets and lies are revealed.

More books like Confessions: Secrets & Lies Revealed may be found by selecting the categories below: