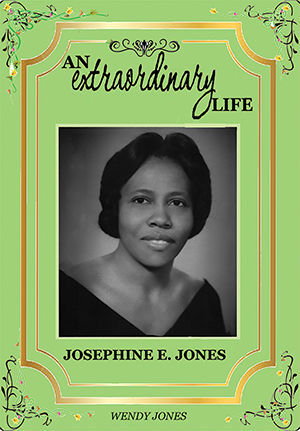 Read Our Review of An Extraordinary Life: Josephine E. Jones

This is the biography of my mother, a South Carolina sharecropper’s daughter, born in 1920, who journeys to New York in 1946 to work as a cook in private homes. By 1967, she is not only a Harlem activist, but also the first black woman in management at a Fortune 500 company, Standard Brands, now KraftHeinz.
Josephine’s voice is the heart of the book with my voice adding historical context at the beginning of each chapter. Also included is an appendix describing how my mother nurtured my education.
I am looking forward to your response to this compelling story. As you will find when you visit the website, www.idabellpublishing.com, you can contact me at idabellpub@gmail.com.

Listen to an Interview of Wendy Jones Interviewed by David Rothenberg on New York City’s WBAI’s “Any Sarurday” July 8, 2017

Josephine Jones, born in 1920, the daughter of a South Carolina sharecropper, became, in the sixties a Harlem activists as well as the first black woman in management at a Fortune 500 company.As a single parent, she worked on three jobs to send her daughter to private schools.The importance of education runs through Josephine’s life like a golden thread. Josephine’s life was directly affected by the Great Migration, the civil rights movement, the women’s movement, the gentrification of Harlem, and the AIDS epidemic. An Extraordinary Life: Josephine E. Jones is an American story, a Great Migration story, a New York story, a black family’s story, a mother-daughter story, and the story of a woman’s fight for creativity in the workplace.

“An Extraordinary Life: Josephine E. Jones is an empowering book that lifts the level of every reader’s thought pattern. Most admirable, is her love for young people and her drive to help them find ways to lift themselves above the stereotypes embedded in a system that always seems bent on keeping them down. She stands up to authority and fights for principle and fairness at a time in America’s history when doing so was not without great risk. This book forces us to accept the fact that we have no excuse for inaction.”
—Gretna Wilkinson, Geraldine R. Dodge Poet and founder of theravensperch.com, an international literary magazine.

“An Extraordinary Life: Josephine E. Jones, a twentieth-century black woman and the daughter of sharecroppers, who dedicated herself to hard work and single motherhood (the man she married turned out to have a weak work ethic, and she quickly divorced him for it).

In the course of her life she rose from domestic cook to temp work to becoming the first black woman in management of a Fortune 500 company. She was also a Harlem activist, and worked multiple jobs to ensure that her daughter would have the best education and the best life possible. Penned by Josephine’s daughter Wendy Jones, An Extraordinary Life: Josephine E. Jones is also a testament to the bonds that connect mother and daughter, as well as to human courage and motivation. Highly recommended.”
—B. Cox, Managing Editor, The Midwest Book Review

Books similiar to An Extraordinary Life: Josephine E. Jones may be found in the categories below: