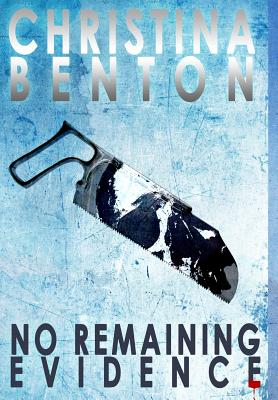 No Remaining Evidence: A Noel Patterson Novel
by Christina Benton

Hardcover Description:
Noel learned how to get away with murder while in grad school. Little did she know she would actually have to use those skills one day. Christin’a Benton’s debut novel introduces us to Noel Patterson, a forensic anthropologist and professor at the University of Charlotte. One night, when leaving campus, Noel is brutally attacked. She is in for the fight of her life and just as it seems she will not survive she turns the tables and kills her attacker. As the knife plunges into the man over and over again some dark, hidden aggression clicks inside of Noel. She snaps and goes berserk on the corpse at her feet. Hate, anger, and rage consume her but alongside those feelings is a familiar, high-like feeling that she can’t explain. A euphoric feeling emerges as she slams the knife in and out of the dead man again and again. She likes it… a lot. Once she is down from her high and as she sits in a pool of blood panic sets in. Now Noel is in a frantic race to dispose of the deadman in her back seat. Lucinda Marcelis, a hard nosed detective willing to do whatever it takes to solve a case, is on the scene. She assesses the crime scene and is baffled at what she sees. It’s obvious a heinous crime was committed by the amount of blood on the parking garage floor but there is no body, no remaining evidence. Her only clue is the security data that leads her to the doorstep of professor Noel Patterson. But what happens when a forensic anthropologist has awakened an uncontrollable urge to kill? Noel decides she can’t fight the urges and decides that she will kill again. She evades the cops and goes on a murdering spree, stalking and killing sexual predators. Who better to get rid of while satisfying her own homicidal needs, she argues. Scared of these newfound feelings, however, Noel reaches out to her long-time therapist Doctor Coleman. Noel doesn’t want to be this way. She doesn’t want to enjoy killing people. Now she has to persuade Doctor Coleman to help her get over this compulsion without risking getting caught. As things escalate Detective Marcelis is closing in on Noel. She refuses to let Noel get away. She will stop at nothing to catch the professor. But in the end will Marcelis put Noel away or something worse?

More books like No Remaining Evidence: A Noel Patterson Novel may be found by selecting the categories below: