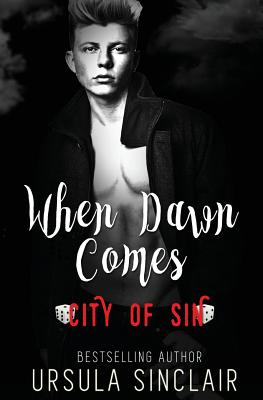 When Dawn Comes: City of Sin
by Ursula Sinclair

Paperback Description:
Aaliyah I’m the daughter of a daemon lord of hell. And one of his best soldiers in Vegas. I’ve spent my life doing his bidding and gathering souls. The more souls gathered, the greater the daemon powers. I took great pleasure in stealing a soul from beneath the nose of the damn guardian angels. That was the only life I knew, and I excelled at it. Until one day, I tried to steal a dying soul that didn’t belong in hell and an angel came to stop me. In doing so, he showed me the world I knew was a lie. Micah My human life ended to save the woman I love. My reward was to become one of heaven’s angels, a guardian of souls. I didn’t want to leave her, but I thought eventually we’d be reunited. For decades I’ve waited and searched for her but never found her. Then one day, to my shock, the soul I’d been sent to save was being taken by a daemon. I finally found Aaliyah, only now I have a fight before me. She has no memory of us, but I know I have to save her soul. And if I have to give up heaven to do it, so be it. We have a daemon lord to kill.

More books like When Dawn Comes: City of Sin may be found by selecting the categories below: