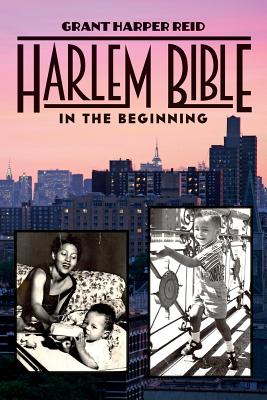 Harlem Bible: In The Beginning
by Grant Harper Reid

Multi-Book Award-winning author Grant Harper Reid has authored his second book Harlem Bible. Grant has taken a nod from the old master Lao Tzu, the keeper of the Imperial Archives who proclaimed to the world, "A Good Reckoner Needs No Tally." In the Harlem Bible Reid demonstrates himself to be a good reckoner indeed. Reid’s first book was considered to be a work of pure literary genius, full of humor that pushes the envelope. Harlem Bible is a delightfully amazing and exceedingly enjoyable book. Grant reminiscences his early years as an innocent young black child growing up in Harlem and the suburbs of New Jersey. We weave through the author’s past with flashbacks and an assembly of timelines that are and chock full of fascinating bygone circumstances of yesteryear.

The impetus behind the Harlem Bible came from the author’s angst as his beloved Harlem neighborhood became gentrified. With gentrification came newcomers who distorted and misrepresented the historical descriptions of his community. Grant took it personally when condescending intruders flooded onto his beloved streets and defined Harlem’s glorious past to suit their one-sided cravings.

Reid watched as many authentic Harlemites passed away taking their tales with them to their hereafters. He chose to do something about it, and thus he wrote the Harlem Bible. Harlem Bible arranges the groundwork with corroborated verifiable information then discharges it with reflections for the benefit of the readers. Please don’t misperceive the Harlem Bible with the usual pasteurized half-stepping Negro books with no basis in fact. If you want to understand the hidden black culture that most colored people will not admit to then this book is for you.

Harlem Bible is a look through Grant’s life with his family, friends, associates, and adversaries. Grant gets bussed to an all-white public school in the Bronx and we follow him. While there he discovers for the first time what it is like to be a black boy when white students call him Nigger. We find out the authors reaction when he goes to a black summer camp and the "It" girl asks him for a dance. We learn of Reid’s response at a Jewish day camp after he attempts to befriend the beautiful Jewish American Princess who rebuffs him and won’t give him the time of day?

What happens to the young author when he sneaks into Jimi Hendrix’s limousine without the proper authorization? Discover what happens when the author looks into the mirror and mistakenly concludes that, "he ain’t got one scintilla of talent" himself. Laugh with, and at him he attempts and nosedives downward when he wants to become a black hippie. What happens when Grant visits the mixed-race Negro hillbillies called Jackson Whites and believed that they want to make him their primary dinner course?

More books like Harlem Bible: In The Beginning may be found by selecting the categories below: