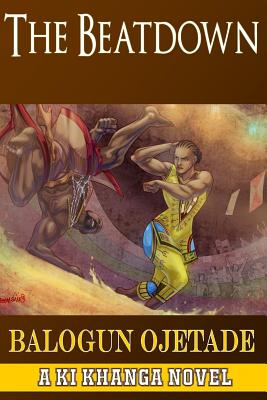 The Beatdown: A Ki Khanga Novel (Volume 1)
by Balogun Ojetade

Paperback Description:
The coolest videogame you’ll ever READ! “A Single Link NEVER Breaks!” Remi Korede is a martial artist and a fan of THE BEATDOWN, a popular MMORPG set in the fantasy world of Ki Khanga. In The Beatdown, players fight each other in the circles of sand and soil to prevent full-scale wars and the wrath of a vengeful Creator who almost destroyed the world when war on earth spilled over into the Heavens. Players experience every punch, every throw, every kiss and every sip of honey wine in The Beatdown, so the stakes of every encounter, violent or not, are high. After suffering a brutal assault at the hands of a martial arts champion in the game, Remi decides that, to gain closure and empowerment, she must face her attacker in the first professional fight between a man and a woman. Remi, fighting as The Single Link’ because a single link never breaks becomes a symbol to the people of Ki Khanga a symbol of courage; of standing against oppression and discrimination; of freedom. Join the fight in THE BEATDOWN, the epic tale that brings together the very best in Sword and Soul and Gamelit/LitRPG!

More books like The Beatdown: A Ki Khanga Novel (Volume 1) may be found by selecting the categories below: