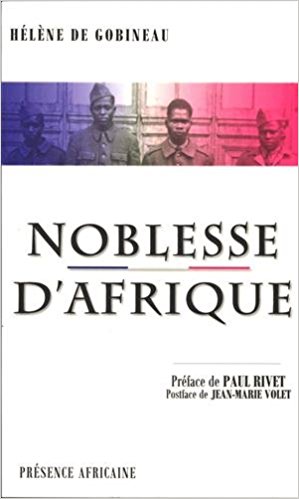 It was by the thousands that young men from Western Africa joined the French army at the outbreak of World War II. Many never returned home, killed in action, dying in prisoner-of-war camps, or worst of all, slain by their own army when a liberated France turned its guns against her Black soldiers when they demanded their pensions and entitlements in the Thiaroye Camp [1]. This dark leaf of French History has overshadowed the "Tirailleurs’" gallant contribution to the war, and African soldiers have received only scant attention by French authors over the years [2]; hence the interest of Noblesse d’Afrique [African virtues] by Hélène de Gobineau who joined in the war effort, first as a canteen lady in Paris’ Gare de Lyon, and later as a volunteer assigned to POW colonial camps and hospitals where Black soldiers were kept under German guard.

Noblesse d’Afrique is especially interesting because it offers a thoughtful exposition of African soldiers in France, one that empathises with the plight of the young men interned far away from home, one that speaks from the heart. As Hélène de Gobineau’s puts it:

I spent five years of war with the Mandinkas, Susus, Saracoles, Peuls, Wolofs, Serer, Baoule, Fons and Mossis… without leaving the banks of the Seine River. I knew them unhappy, harassed, cut off from everything they loved, fighting against death… Slowly, very slowly I gained their trust. And I am sure that I now know much more about them than the restless reporter who crossed their country, impatient to visit everything; much more than the colonialist who is assuaging his conscience in believing that these men are inferior… As far as I am concerned, I am only telling a few anecdotes similar to those every sister and voluntary aide could have told. And each of these stories expresses the same common values: nobility, generosity, courage, a sense of equality and justice…”

Read the rest of Jean-Marie Volet’s review review of Noblesse D’Afrique (the original version published in 1946).