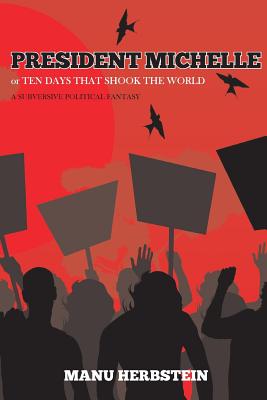 President Michelle, or Ten Days that Shook the World: A Subversive Political Fantasy
by Manu Herbstein

Paperback Description:
President Michelle, or Ten Days that Shook the World: A subversive political fantasy Manu Herbstein’s short tale is a political logbook of the days following Michelle Obama’s inauguration as the first female president of the United States. Having been catapulted to the presidential post by a zealous electorate in search of stability and reassurance following the untimely death of President Obama, the mourning Mrs. Obama arrived without campaigning, owing no favors, and free to serve the interests of the people. Quite unexpectedly, she proceeds over the next several days to unveil an agenda that is radically different from that of her late husband. Her surprising policies have politicians cringing and the public raving with delight. The narrator is a sought-after author charged with covering the president’s first days in office. He steps us through President Michelle’s reasoned speeches and proposals. She writes bills for Congress to ponder and she deftly spells out a program for change. For instance, as one of her first acts she promises to sign the global treaty placing the US under the jurisdiction of the International Criminal Court. She also pledges to immediately end the wars and to close the US bases around the world. Through careful worded reasoning, she argues for moral leadership. Her populist policies and philosophy earn her both acclaim by the world’s peoples and also turbulence in the financial markets. Aside from the author’s creating the untimely death of a sitting president (a weighty and touchy ploy to use), the fictional president Michelle was a creative device for articulating a different approach to world leadership, clearly the motive of the work. Herbstein unfolds his world view craftily as the mysterious new president unpeels her agenda in reasoned bits at a time. Not presuming to be a novel with developed characters, relationships or interactions, only oblique references to her duties as widow, mother, and holder of presidential power humanize the character. The author relies heavily on the reader’s familiarity with the historic Michelle Obama to round out her personality. It is easy to see that there is rich ground left to cover should he one day extend this work to a novel or screenplay. This reader enjoyed the short story. Sections of it had me well up in tears as I pondered how far we are from the ideals the book contemplates. This e-book captures the energy and expectations of a class of people around the world who once suspected that President Obama might himself have been the harbinger of a radically revolutionary type of leadership. In their disappointment, this fictionalized President Michelle Obama may help preserve some sense of hope in a politically bleak (and certainly non-revolutionary) performance by the historic president Obama. This is a review by Kweku of the original Kindle edition of the story. The story was written in late 2009 and first published on May 30, 2011.

More books like President Michelle, or Ten Days that Shook the World: A Subversive Political Fantasy may be found by selecting the categories below: