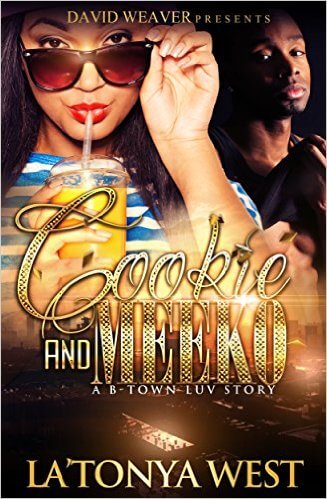 Cookie and Meeko: A B-Town Luv Story
by La’tonya West

Michael “Meeko” Williams and his brother have relocated from Atlanta, GA to the small town of Boykins, VA in an attempt to start fresh. After doing so much dirt in the streets of Atlanta the only option left for the twenty-six year old dope boy is to leave or end up in an early grave but everyone knows that relocating doesn’t change who you are.

Being a hustler at heart, it was nothing for Meeko to come to the country and quickly have everything on lock. Him, his brother, and their new team have money flowing in like water and with the money comes women, willing and ready to do anything for a chance at being the main chic of a well-paid dope boy. Problem is Meeko only has eyes for one woman… Cookie.

Cookie’s the complete opposite of all of the women that Meeko’s dealt with since arriving in Boykins, including his baby mama Shy. Quiet, hardworking, intelligent, and simply determined to have more than what her non-supportive family envisioned for her. She’s also been able to stay away from the BS of the small town. That is until her and Meeko’s paths cross… she’s exactly what Meeko feels he needs in his life but his fast paced, chaotic lifestyle isn’t what she wants or needs, which causes her to initially ignore all of his attempts to pursue her.

After trying her best to deny and fight the chemistry that she and Meeko obviously have, Cookie finally falls victim to his southern charm. The two couldn’t be a more perfect match but when the town starts talking and word gets out that Cookie is the new lady in Meeko’s life, she will have to endure his ratchet baby mama and what seems like never ending drama in order to hold the title of “wifey” and it won’t be easy.

With everything and everyone against them, can love really conquer all?