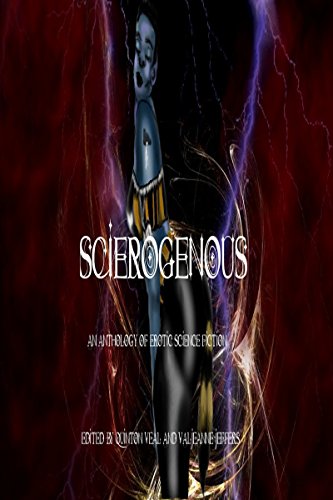 Cranston Burney discovered his love of writing about the same time he reached puberty; he is convinced that somehow, this is not coincidental. A proud blerd, when he is not seeking out (or creating) new life and new civilizations, he contributes media commentary to the Black Science Fiction Society’s website and shares his opinions on the OTHER SCIFI podcast. He lives in northeast Florida and cannot understand how anyone could possibly think Han didn’t shoot first. Contact Cranston at: http://www.shadyproductions.info/

Laura Elena Caceres born in April 27th 1985. She works and lives in Monterrey, and has a bachelors degree in Mexican and Spanish Literature from U.A.N.L. (Universidad Aut noma de Nuevo Le n). She hails from Reynosa, now one of the most dangerous cities in Mexico, but which also borders Texas; which is why she writes in English and Spanish from the heart. At 15, she decided to become a full-time writer. Her stories and poems are published in anthologies and magazines from Mexico; most of them with sci-fi and fantasy themes, and she is a guest writer at El norte.

Jeff Carroll has written and produced two films, and published three books, Thug angel; Rebirth of a Gargoyle; It Happened on Negro Mountain; and Sci-fi Streetz. His short stories have appeared in numerous anthologies including: The Black Science Fiction Society’s anthology and The City. Jeff also produces The Monster Panel, a traveling sci-fi panel which features writers of color. He writes out of South Florida where he lives with his wife and youngest son. Connect Jeff at his blog: http://hhcnf.blogspot.com/ and on Facebook, Instagram and Twitter.

James Goodridge born and raised in the Bronx, New York. James is new to writing speculative fiction. After ten years as an artist representative and paralegal, James decided in 2013 to make a better commitment to writing. He is curently writng a series of short twilight zone inspired stories from the world of art, The Artwork; and a diesel-punkfunk saga, Madison Cavendis: Seneca Sue Mystic Detectives, with the goal of producing compelling stories.

Valjeanne Jeffers is a member of the Carolina African American Writer’s Collective, and the author of eight books. Her writing has been published in numerous anthologies including: 60 Years of Black Women in Horror Fiction; Steamfunk!; Genesis Science Fiction Magazine; The Ringing Ear: Black Poets Lean South, Griots: A Sword and Soul Anthology; Liberated Muse I: How I Freed My Soul; PurpleMag; Drumvoices Revue Issues, Griots II: Sisters of the Spear, and The City. Valjeanne is also one of the screen writers for the horror anthology film, 7Magpies (in production).

Quinton Veal is the author of four books, an artist and a poet. Quinton has created numerous covers including Immortal: Stealer of Souls, and The Collected Works of Quinton Veal. His art has also been featured in the O.T.H.E.R. S.C.I. F.I. Magazine; and Genesis Science Fiction Magazine Summer Issue 2012; and his poetry has been published in Poetic Gumbo; I Want My Poetry To … and Hurricane Katrina Couldn’t Break Us. His digital portrait, Queen in Tears, also appears on the cover of Reflections Literary and Art Magazine (2014). Quinton is co-owner of Q & V Affordable Editing.