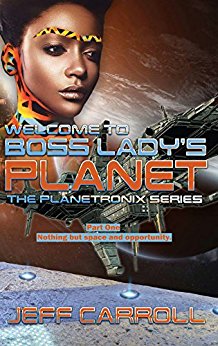 Welcome to Boss Lady’s Planet: The Planetronix Series part One
by Jeff Carroll

Kindle eBook Description:
Okay, see what had happened was, the human planetary system of earth ended a long grueling war with a fish-like alien race. A war with human casualties so high that if HyperCorp hadn’t developed military robots, they would have lost. However, afterward, they had a surplus of human war vets and millions of army robots. This was not a good combination; the planetary system was a hot mess. Although gambling and prostitution were confined to one planet, Verde, crime on each planet was rampant. Interplanetary smugglers were the worst. The problem was the same as it had been through time. War veterans needed work, legal work, but only the illegal sector was hiring.