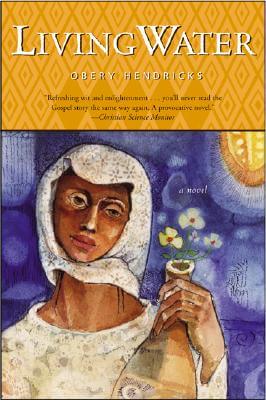 Read a Description of Living Water

The Woman at the Well is a well-known bible story that almost begs for deeper examination.  Her conversation with Jesus, and His promise of "living water" is a staple of church sermons, and has provided hope and comfort to many.  But does the faith community truly understand all of the ramifications of this story?  Obery Hendricks in his debut novel, Living Water, unfolds this tale like the petals of a rose, and provides a thoughtfully crafted back story on the woman at the well (TWATW), one which is almost as enlightening as her encounter with Jesus.

A Samaritan town existed in relative stability until "That Day" when Roman soldiers pillaged and humiliated the entire community. The result was that "Every soul in the village was scarred by the horror."  How can the community heal itself from this irreparable cruelty?  Living Water describes a thoroughly broken people who were living desperate lives under the harshest of conditions.  Their misery led to their continued ignorance, and to making decisions out of hate and desperation. Their dilemma is universal in displaying how hard it is to find the courage to heal from calamity, and the self-imprisonment that results.  Living Water offers a message about the far-reaching impact of cruelty: Communities in despair turn inward, and the hurt just keeps perpetuating itself.

Even in girlhood TWATW was disdained as a "Gibora Girl", because her intelligence, liveliness, and lack of deference to men made her stand out.  As she matures she is molded into acceptability. Upon her arranged marriage she is eager to fit in and be an "good" wife, but her husband's cruelty and immaturity immediately thwarts their union.  When he asks her to participate in a kinky sex act, her knowledge of what pleased God overrode her husband's request.   Because she displeased him, in the custom of the time, he declares 'erwat dabar' or immediate divorce, relegating her as "damaged goods" and committing her to a life of relentless misery.

Author Obery Hendricks writes with sensitivity and a genuine understanding of the full spectrum of feelings of both the women and men of this scarred Samaritan community, and he possesses a startling insight into human nature. The reaction of TWATW's brother-in-law to her predicament, where he wanted to help, but was afraid of his own attraction to her is an excellent example of humankind's constant war between their high and low natures.  Hendricks recognizes and brings to light the tiniest human feelings that reside in the crevices of our hearts, but are usually dismissed out of embarrassment.  For example, why do certain people catch hell, or are disliked with out reason?   Hendricks makes it clear that it is not so much one's actions, politics or thinking that lead to dislike, but it is the presence of alertness and energy that makes a person suspect, or gibora.  Being a lively person in a broken community sets you apart and makes you a threat to the existing order. Being gibora is tantamount to thinking one has worth before God.

In exploring the concept of being gibora, Living Water addresses an experience that is common, but rarely discussed -- having a consciousness that is higher than that of the collective community.  In certain African American communities this is usually expressed by the oft-heard refrain, "She think she cute!", (usually made by a woman and accompanied with a grimace, sucking of teeth, and a swivel/bobble/jerk of head and shoulders.)  It is interesting to note that men are rarely dissed for having a good self image that can lead to the community's betterment -- only women.  In the story of TWATW, the equivalent of thinking she was "cute" was being a gibora girl: precocious, clever, intrepid, self-determining -- a shocking and unforgivable sin!

Hendricks imposes an African American perspective on this story by identifying the Samaritans as a brown skinned, mentally and physically enslaved people, and the Romans as white, dominating, cruel masters. To even further hone the parallel between Samaritans and African Americans, Hendricks writes the dialogue with today's vernacular to describe conversations that took place 2003 years ago.  As one woman says to another: "’ you'd better use the time you save to find a new place to live.  Cause your man would be shouting 'erwat dabar' so fast it would make your head swim."

The story is a surrogate for the impact of slavery on present-day black male-female relationships, and features men and women who devalue and disparage each other as a matter of course.  The big city prostitutes perceived the country Samaritan rubes as "’cawing nuisances to be bartered a taste then shooed away’ to men the women were meat, carcasses imbued with breath and animation, tawdry lumps of flesh without sense or feelings.  Devalued, occasionally beaten, mere meat to those who sought their favors, these were the lives they chose."

Anyone who is a student of The Word will be excited to read Living Water.  The passage describing TWATW from John 4: 7-29 is featured at the very beginning of the novel, but additional bible passages, perhaps interspersed through out the book would have made Living Water more instructive, in addition to being an outstanding novel. Also more explanation of the relationships between the Romans, Samaritans and Jews would benefit many readers.  Sometimes the book was too detailed with background and description, but Hendricks is to be commended for his thorough research on Samaritan culture in the time of Jesus.

It turns out the TWATW has a name -- Maryam -- and her re-claiming her identity is one of Living Water's highlights.  But despite this victory Maryam is still a symbol for all maligned women through out time, possessing no value except as the property of men.  As Big Mama, a prostitute, explains, "There's one thing you're going to learn in life: every woman living with a man is a paid for woman. All them so called respectable married women are just like us: sleeping with a man so he can buy her what she needs.  The difference is in what my kind of paid for women gives back."

All of the qualities of Living Water -- its handsome cover illustration, scholarship, historical research, use of Hebrew words -- indicate a thoughtful construction and signal its value.  Hendricks' skillful writing makes Living Water impressive, rich, absorbing, worthwhile and enjoyable to read.  This is a book that readers will feel on more than on level, and many will be close tears because of the relentless ignorance in which the characters live.  Living Water gets better with each page, and it is worthwhile to ponder whether Hendricks' writing was divinely inspired’

If readers are lucky, Living Water's excellence will inspire more back-stories on Old and New Testament figures.  Examinations of the stories of Joseph and his brothers, Mary and the virgin birth, the life of John the Baptist, the travels of the Apostle Paul, Jonah, Noah, Esther, and others would contribute mightily to how we live our present day lives.

Even with the passage of 2003 years it is sad to observe that there has been scant progress in human self-enlightenment and higher consciousness.  Little has advanced in peace among people, harmony within communities, and positive relationships between men and women.  It would appear that the same base, knee-jerk emotions, borne of hurt and fears, still prevail.  But as the bible counsels, judge not by appearances.  Never has there been a better time for people of good will to stand up and shout out loud, "Gibora’ and proud!"