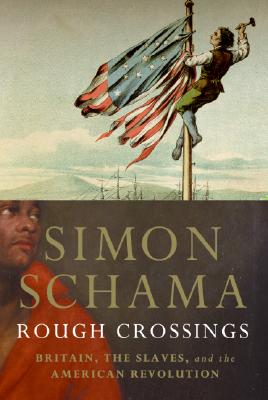 Read a Description of Rough Crossings: Britain, the Slaves and the American Revolution

’Seeing the Revolutionary War through the eyes of enslaved blacks turns its meaning upside down. ’ The vaunted war for liberty was a war for the perpetuation of servitude. The contortions of logic were so perverse, yet so habitual, that George Washington could describe [Virginia Governor] Dunsmore as ’that arch traitor to the rights of humanity’ for promising to free slaves whilst those who kept them in bondage were heroes of liberty.

[Therefore] for blacks, the news that the British were coming was a reason for hope, celebration and action.

In order to appreciate Rough Crossings fully, you have to be prepared to throw out virtually every preconceived notion you are probably harboring about the birth of this nation. The self-serving myths long propagated about the American Revolution would have us believe that the Founding Fathers were a brave and idealistic freedom-loving bunch who altruistically took up arms in the name of independence over the issue of taxation without representation.

Truth be told, it turns out that the Civil War wasn't the first to be waged over slavery on this country's soil. The real reason for the revolt in 1776 had more to do with the colonists' reluctance to abolish slavery than with differences over the King's tax rate.

As a consequence, the leaders of the rebellion were all slave owners, including such supposed heroes as George Washington, Thomas Jefferson, Benjamin Franklin and Patrick Henry. But I bet you never heard of Henry Washington, a slave of General George who escaped from the plantation to enlist in an all black British regiment to take up arms against old wooden choppers. Why did Henry do so? Because England had promised freedom outright to any slaves from rebel plantations who agreed to fight with the Redcoats.

Thanks to Columbia University Professor Simon Sharma, author of Rough Crossings, we now know that Henry Washington was not alone. Although the history books canonize Crispus Attucks, a black man, as the first patriot to die for the noble cause at the Boston Massacre, seems that he had aligned himself with the wrong side, at least as far as the interests of Africans in America were concerned.

In fact, for every Attucks, there were probably a thousand Henry Washingtons. While the Loyalists eagerly recruited blacks, in 1776, Congress passed a law specifically excluding slaves from massa’ George Washington's Continental Army. The author refers to this wholesale flight of runaways as the Revolutionary War's ’dirty little secret,’ estimating that about 100,000 slaves defected during the conflict.

Yet, the Father of Our Country, whose virtues continue to be extolled in hypocritical history books as a man who could never tell a lie, is exposed, here, as an inveterate two-face who deliberately defamed his opposition as being against freedom when it was he and his racist cohorts who had answered the call to arms to preserve the institution of slavery. In sum, Rough Crossings represents a long-overdue revision of fiction into spellbinding factual narratives which answer lots of long-suppressed questions about a seminal period in American lore.

Required reading as a counterbalance to all the patriotic claptrap we've been fed for generations.

Read To Be Determined’s description of Rough Crossings: Britain, the Slaves and the American Revolution.