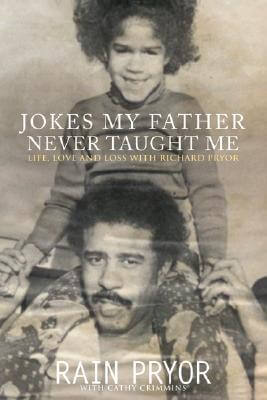 Read a Description of Jokes My Father Never Taught Me: Life, Love, and Loss with Richard Pryor

"It was Thanksgiving. Dad had a lot of friends and family there, including’ a couple of girls stashed in the bedroom’ Finally, Mamma called everyone to the table. I remember walking past Dad's bedroom, and hearing the girls say they were waiting on their money, so when I got to the table I sat down and immediately turned to look at him. ’Daddy,’ I said, ’the whores need to be paid.’

When the laughter died down, Daddy went off to pay the whores, and then we had ourselves a wonderful Thanksgiving dinner. Whores were part of our lives, I guess, and they’d always been part of Richard and Mamma's lives.’
’A Thanksgiving remembrance from a chapter entitled ’We Are Family’

Everybody knows that Richard Pryor (1940-2005) was a comedic genius known as much for his irreverent stand-up act as for his appearances in movies like Silver Streak, Uptown Saturday Night and Stir Crazy. But most of his fans are undoubtedly unaware of the side of him shared by his daughter, Rain, in ’Jokes My Father Never Taught Me,’ as revealing and as heartbreaking a dysfunctional family memoir as you could ever hope to find.

This unexpurgated tell-all was co-written with Cathy Crimmins, author of such diverse titles as ’The 7 Habits of Highly Defective People,’ ’How the Homosexuals Saved Civilization,’ ’Curse of the Mommy,’ and ’the Secret World of Men.’ Since this seems to be Crimmins' first venture at ghostwriting an this autobiography, fortunately, the book never reads like the formulaic work of one of those Hollywood hack for hire.

To the contrary, this is one of those hyper-realistic page-turners you simply cannot put down, primarily because Richard lived life to the fullest, and little Rain apparently was blessed with a memory like a steel trap. And though she somehow still has warm feelings for her dearly-departed father, the picture she paints of the man is nothing short of a monster.

For instance, she relates how he was too busy in bed with the housekeeper to pick up her mother, Shelly Bonis, from the hospital after the birth of the only child the couple would have together. Not surprisingly, Richard ended that second marriage not very long thereafter, but not before he would physically and emotionally abuse his wife. Rain says this pattern was repeated during all of her dad's half-dozen marriages, unions which would produce a total of seven equally-neglected offspring.

Because both of her parents turned out to have little interest in child-rearing, and since her paternal grandmother was a prostitute in Peoria, Rain considered herself lucky to have maternal grandparents inclined to raise her as an African-American Jewish Princess. Having been a manager in show business, Grandpa Bonis had the money and Grandma Bonis had the wherewithal to provide her some semblance of stability, a welcome escape from all the insanity.

Meanwhile, her mother temporarily moved to New York to work as a stripper, and her father continued womanize and to indulge his addictions to crack, cocaine and other substances. What makes Jokes My Father Never Taught Me most compelling is Rain's matter-of-fact honesty, whether when speaking about losing her virginity in the eighth grade to two guys at once (twins, in fact), or about her own and her father's suicidal tendencies. Turns out that that widely-reported incident in which Richard supposedly set himself on fire in a freebasing accident was actually an attempt to kill himself.

As fascinating as a 50 car pile-up, provided you don't mind having an adored icon knocked permanently off his pedestal, posthumously, by a ’Daddy Dearest’ diary.