Book Review: Something Like Beautiful: One Single Mother’s Story 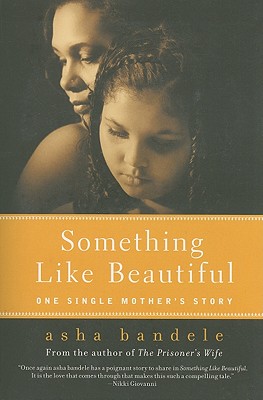 Read a Description of Something Like Beautiful: One Single Mother’s Story

In many ways, the award-winning poet and journalist asha bandele's second memoir, Something Like Beautiful: One Single Mother's Story, is a testament to one African American woman's peerless courage. While her debut book, The Prisoner's Wife, published in 1999, explored her pure, restricted love and wedding to Rashid, a man serving a lengthy prison sentence, this latest offering concentrates on her all-enveloping mother love along with her valiant confrontations with her confusing life choices.

From the beginning, asha had a sketchy start, not like the usual girl from a stable, secure family. Life can be unfair. The list of calamities in her life is significant: adopted at age three, sexually abused as a young girl, and emotional turbulence during her adolescence and early twenties. She suffered from an almost fatal lack of self-esteem, which fueled two matrimonial couplings that went awry. See, there was another previous marriage before her great love with Rashid and their whirlwind romance of prison visits, letters, and calls of whispered secrets.

Told in a lyrical, bold manner in this memoir, bandele's narrative style is to strip her essence bare, spinning center-stage for all to see with her emotional scars and bruises of the heart. Completely warts and all. Her suffering and candor becomes a poetry of a sort, a tear-stained praise song, with a blend of Audre Lorde’s valor, Robert Hayden's romantic majesty, Rumi's mystical hymns, Ai’s surrealistic art, and Sonia Sanchez’s warrior queen spirit. And yes, she can be vague, secretive when it counts, yet she thrusts her self straightaway into the dark nexus of the thing called intimacy . Another man, another love, another occasion for the abuse of the soul. With sterling accuracy, she writes so well of heartbreak, disappointment, and tormented feelings.

Putting the cherished memory of her grand love, Rashid, behind her, she embarks on a new set of adult feelings with Amir, a bitter-sweet union which will ultimately fail to satisfy her needs. She is a smart woman who clings to a thorny love that pricks and damages her mightily. A lot of women share her fate. She lays down the map of revelatory truths to get the female heart unattached and on the road to freedom. Next, another bedrock section of the book is the emerging portrait of Nisa, her masterpiece, her marvel of flesh-and-blood who asha knows she can't fail while she conducts her grown-up business out in the world. The reader falls in love with her daughter, this ball of wonder.

Sure, some of the book seems out of focus, as if seen through a colored prism. However, it is only momentary and serves as a point of departure for the more permanent flashes of clarity and wisdom which come after the initial confusion. She suffers from depression, the clinical kind, which she could have sidestepped mentioning. But she doesn't. She speaks openly about the mood swings, the bad choices, the shrink and the therapy to lessen its effects. Some critics have said the book is a downer; some have also said she is too self-absorbed and easily distracted to be a devoted, responsible mother. Others just can't identify with the plight of a struggling single mother. For all of these people, put yourself into her shoes and try to feel what it must be like to be totally responsible for another little soul without support.

Furthermore, the overall majority of the text is right on target. She spells out that love and romance can be as deceptive and addictive as a hit of crack or meth. She does not preach on the large, significant themes of love, family, race, victimization, male integrity or the lack of it, or even the Black community in total. When she approaches these themes, she focuses on them with a noble sense of balance and commitment. She is unafraid. She has taken her licks and come out on the other side: redeemed, recovered, and rejuvenated. No whimpering. No shifting of blame.

This book, Something Like Beautiful, is about healing and returning one's life to a sense of order. Healing requires no pity or remorse. Healing requires character and courage. Pick this memoir up and you will see plenty of those qualities.

Read Amistad’s description of Something Like Beautiful: One Single Mother’s Story.