Book Review: Bitch Is The New Black: A Memoir 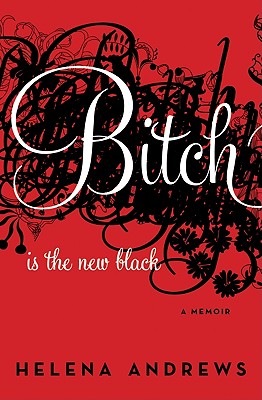 Read a Description of Bitch Is The New Black: A Memoir

"I'm such a badass. I am literally the baddest bitch on the planet. If there was a bitch contest between me and every other heartbroken, hissing, red-eyed, puffy-faced woman in the world, I would defeat every last one of them--handily… I'm a bitch, but I swear I don't want to be. Really, I think I have to be."
-- Excerpted from Chapter One (pg. 4)

Normally, I'd say it takes a lot of nerve to publish your memoirs before you even turn 30, but in the case of Helena Andrews I have to concede that it turns out to be totally warranted. For this fiery young sister not only already has a lot of life experiences under her belt, literally and figuratively, but has cultivated a wealth of wisdom to share well beyond her years. And, perhaps most importantly, she has a most beguiling way with words which keep you intrigued with what's coming out of her mouth next in this shockingly-frank autobiography.

As for credentials, Helena's a seasoned journalist who has worked for The New York Times, O Magazine and Politico since her graduation from Columbia University. This impressive resume' sounds fairly conventional, until you factor in that she was raised by a lesbian on Catalina Island, where she was the only black kid in town.

Her writing style might best described as a non-linear stream of conscious reflecting that Ivy League pedigree but blended with an introspective compulsion to bare her soul. The upshot is an unexpurgated opus which primarily focuses on her frustrations over a never-ending string of failed relationships.

The author is not at all hesitant to dish the dirt on her ex-lovers as she reflects on what went wrong while issuing cautionary warnings about the hazards of dating in the 21st Century. So, over the course of this alternately angry and steamy page-turner, the author shares her feelings about everything from the guy who took her virginity to having an abortion as a college sophomore to the sexual tension between her and a black lesbian colleague to sabotaging a budding romance with a dreamboat for calling her the "perfect girl." Curiously, she also admits to not knowing "whether to take it as a compliment or a curse," upon being told that she "had the best p*ssy in the world."

Bitch Is the New Black's terminally-irreverent slanguage is offset by somber asides like "This is why I never win" and "I want never to be in love again." Consequently, don't be surprised if by the time you finish it Helena has you thoroughly convinced that she is entitled to her dismal outlook on the battle of the sexes.

Her fatalistic view is summed up best by this exchange about a man who is clearly afraid to flirt with her. "Is it because I'm black?" Helena asks her girlfriend. "No, it's because you're a bitch," comes the telling response. Listen, you know you're in for a heck of a wild, roller coaster ride when a sister's opening line announces, "Problem is, I'm black and I have a vagina."

Read Harper’s description of Bitch Is The New Black: A Memoir.