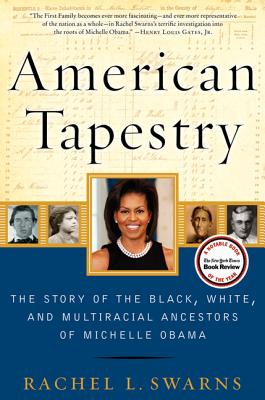 Read a Description of American Tapestry

“On November 4, 2008, Michelle Obama stood before a crowd of thousands of roaring, singing and weeping supporters in Chicago’s Grant Park… It was Election Night and her husband had just become the first African-American President of the United States…

[She] was… the poised picture of a sophisticated, self-assured woman prepared to take her place in history. The truth was, though, that she knew very little about her own [history]…

Like many African-Americans… Mrs. Obama knew her grandparents as a girl, but only bits and pieces about the relatives who came before them. She had grown up hearing whispers about white ancestors in her in her family tree, but no one knew who they were…

The First Lady wanted her girls to understand their own history, and she wanted to know more about it herself… The only way to do that is to go backwards, one generation at a time, peeling back the layers of history to unearth the story of one remarkable family and one singular nation…

Let the ancestors tell their stories. Let them speak from the grave!”

Between Barack Obama’s heartfelt memoir “Dreams from My Father” and a few further-enlightening, encyclopedic biographies of the President written by the likes of Dinesh Sharma (“Barack Obama in Hawai’i and Indonesia”) and David Maraniss (“Barack Obama: The Story”), we have a pretty complete picture of the President’s heritage. Unfortunately, the same couldn’t be said about the First Lady prior to the publication of this painstaking-researched opus.

Thus, the nation owes a debt of gratitude to Rachel L. Swarns, a reporter for the New York Times since 1995, for donning her investigative journalist cap to dig into Michelle Robinson Obama’s past. The upshot of that quest resulted in a reconstructed family tree going back to the 18th Century, including a slave-owning white great-great-great grandfather.

He was a plantation owner who mated with teenaged Melvinia Shields, Michelle’s maternal great-great-great grandmother. From evidence unearthed, the author establishes that the victim was helpless to protest because she had not only been “separated from any close family” since the age of eight but was “living in a society that viewed a white man’s rape of his slave women as a right, not a crime.”

Most of Michelle Obama’s ancestors lived in the Deep South, with her paternal great-grandfather, James Preston Johnson, who settled in Chicago in 1908, being among the first to participate in the Great African-American Migration northward. The book includes photos of both black and white relatives, a motley crew whose progeny you hope might someday have an opportunity to assemble to share a beer in the Rose Garden, if not make up for lost generations at a full-blown family reunion inside the White House.

The First Lady’s lineage as a most-intriguing, multiracial mosaic.