Book Review: After The Dance: My Life With Marvin Gaye 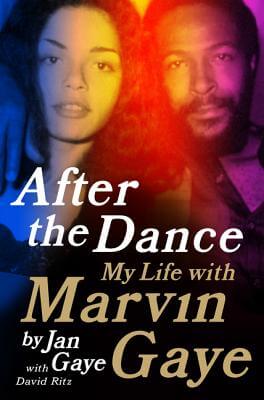 by Jan Gaye and David Ritz

Read a Description of After The Dance: My Life With Marvin Gaye

“After her 17th birthday in 1973, Janis Hunter met Marvin Gaye—the soulful prince of Motown with the seductive liquid voice—whose chart-topping, socially-conscious album ‘What’s Going On’ made him a superstar two years earlier. Despite a 17-year age-difference and Marvin’s marriage to the sister of Berry Gordy, Motown’s founder, the enchanted teenager and the emotionally-volatile singer began a scorching relationship…

But the burdens of fame, the chaos of dysfunctional families, and the irresistible temptations of drugs complicated their love. Primarily silent since Marvin’s tragic death in 1984, Jan at last opens up, sharing the moving, fervently-charged story of one of music history’s most fabled marriages. Unsparing in its honesty and insight, illustrated with sixteen pages of black-and-white photos, ‘After the Dance’ reveals what it’s like to be in love with a creative genius who transformed popular culture.”
—Excerpted from the book jacket

In 1964, 8 year-old Janis Hunter developed a crush on Marvin Gaye while watching him perform “How Sweet It Is” on American Bandstand. It’s easy to understand why the abandoned child continued to cling to such a seemingly-unattainable fantasy, since it helped her tolerate a miserable existence where she was mistreated almost on a daily basis.

But it’s much harder to fathom how she even ended up living in an unlicensed foster home from infancy into her teens. After all her father was a famous jazz singer, Slim Gaillard, and her mother, Barbara Hunter, hailed from a solidly middle-class background.

The problem was that Jan was born at a time when it was still considered scandalous for a white woman to have a biracial baby out of wedlock. Consequently, she grew up in a house with a dozen other orphans and was routinely subjected to mental, physical and sexual abuse.

At 14, Jan was finally allowed to move in with her mother. One of her friends was music producer Ed Townsend, who co-wrote “Let’s Get It On” with Marvin Gaye.
A few years later, Jan was able to meet her idol in the studio during a recording session. The two fell in love at first sight, despite the fact that he was married and over twice her age.

That didn’t discourage them from embarking on a steamy affair that would produce a couple of kids, Nona and Frankie, before the finalization of his divorce from Anna Berry, the sister of Motown Records founder, Berry Gordy. Soon thereafter, however, Jan and Marvin tied the knot in 1977,

If only, theirs was a happy-ever-after tale. But no, that was just the start of a terribly tempestuous relationship marked by drugs, depression, infidelity and suicidal tendencies. All of the above and more is recounted in lurid fashion in After the Dance: My Life with Marvin Gaye, a tell-all autobiography co-written by Jan with David Ritz.

Read Amistad’s description of After The Dance: My Life With Marvin Gaye.