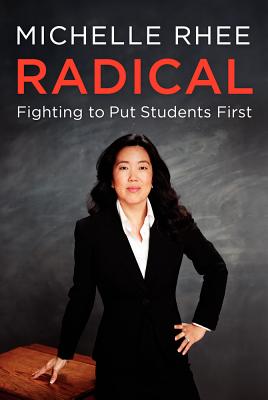 Read a Description of Radical: Fighting To Put Students First

“Why am I a radical? Because in order to live up to our promise as a nation, we cannot rest until we provide a quality education for all our children. If America is truly going to be the land of equal opportunity, we have to provide that opportunity to every single child, regardless of where they live, what color they are, and what their parents do…

Michelle Rhee spent a stormy three years in the public eye as the embattled Schools Chancellor of the Washington, DC public schools. A first-generation Korean-American descended from a long line of educators, she embarked on a career as a teacher in inner-city Baltimore soon after graduating from Cornell University with a BA in government.

However, her star really started to rise after she earned a Masters Degree in Public policy at Harvard University’s prestigious Kennedy School. She was subsequently recruited by NYC School Chancellor Joel Klein to help handle his stalled contract talks with the teachers’ union.

And on the strength of Michelle’s negotiations with UFT president Randi Weingarten, Klein recommended his feisty protégé for the top job in DC. Washington’s public schools were among the worst performing in the nation, and Rhee found a very receptive Mayor in Adrian Fenty, who gave his new hire free reign to overhaul his troubled system in accordance with her controversial reforms.

Mayor Fenty’s reelection bid was basically a referendum on whether the city wished to continue with Rhee’s scorched earth philosophy. When he lost, her days were numbered, so she handed in her resignation rather than wait around to be fired.

A blow-by-blow of all of the above is recounted in riveting fashion in Radical, a revealing autobiography devoted as much to Michelle’s political career as to her private life. As compelling as the debate about teacher tenure, charter schools and private school vouchers was reading about the author’s being raised in a suburb of Toledo, Ohio by immigrants who sent their daughter as an adolescent to live with an aunt back in Seoul for a year.

We get to see what a role having strict parents who put such a heavy emphasis on academic achievement might have played in shaping Michelle’s high hopes and expectations for every child. I was also surprised to learn that this divorced mother of two recently married former NBA star-turned-Mayor of Sacramento Kevin Johnson.

A heartfelt memoir by a passionate champion of every child’s right to a decent education.