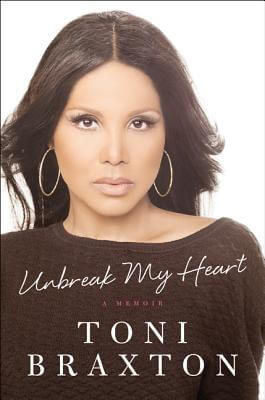 Read a Description of Unbreak My Heart: A Memoir

“While Toni Braxton may appear to be living a charmed life, hers is in fact a tumultuous story: a tale of personal triumph after a public unraveling. In her heartfelt memoir, the six-time Grammy Award-winning singer… is unapologetically honest in revealing the intimate details of her journey…

The mother of an autistic child, Toni had long feared that her son’s condition might be karmic retribution for some of her choices… When heart ailments began plaguing her at the age of 41 and she was diagnosed with lupus, Toni knew she had to move beyond the self-recrimination…

Unbreak My Heart is more than the story of Toni’s difficult past and glittering success, it is a story of hope, of healing, and ultimately, of redemption.”
Excerpted from the Book Jacket

Toni Michele Braxton was the eldest of six siblings born in Severn, Maryland to Evelyn and Pastor Michael Braxton. She hailed from a tight-knit, religious family whose members formed a musical group that was signed by Arista Records in the late Eighties. 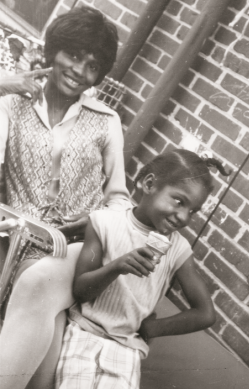 Their first single attracted the attention of R&B producers L.A. Reid and Babyface Edmonds who approached Toni to abandon her promising siblings and strike out on her own. As she puts it, “My answer was yes to the solo deal—but it was the saddest ‘yes’ I’ve ever given.”

While Toni’s blossoming career would catapult her to the heights of superstardom in a matter of months, it also left her haunted with a sense of overwhelming regret. For, although striking that devil’s bargain led to fame and a half-dozen Grammys, it also meant temporarily alienating the affection of the folks she was closest to.

Furthermore, over the ensuing years, she would find her faith tested by a host of woes reminiscent of Job in the Bible. Not only did she make and lose a fortune, declaring bankruptcy twice in the process, but she married Mint Condition’s keyboardist Keri Lewis and had a couple of children with him before going through a messy divorce.

When she learned her younger son, Diezel, had autism, she wondered whether the affliction might be a God-ordained curse for the abortion she’d undergone earlier. Toni’s other low points included developing heart disease, finding a benign lump in her breast, and being diagnosed with lupus.

Fortunately, she has survived to tell the tale in Unbreak My Heart, as forthcoming an autobiography as you could ever hope to encounter by a pop diva. The book even ends on an up-note, since she’s reconciled with her sisters and mom to the point where they all appear as regulars on the reality-TV series “Braxton Family Values.”

A candid, heartfelt memoir chronicling a grateful Prodigal daughter’s humble return to her roots after experiencing some of the highest highs and lowest lows life has to offer.

Read Amistad’s description of Unbreak My Heart: A Memoir.