Book Review: The Price Of The Ticket: Barack Obama And The Rise And Decline Of Black Politics (Transgressing Boundaries: Studies In Black Politics And Black Communities) 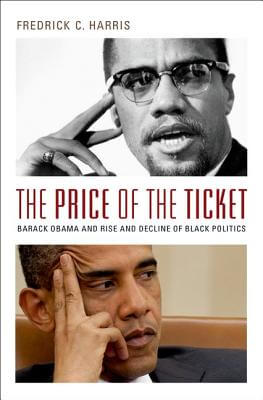 Read a Description of The Price Of The Ticket: Barack Obama And The Rise And Decline Of Black Politics (Transgressing Boundaries: Studies In Black Politics And Black Communities)

“Barack Obama’s triumph in the presidential election of 2008… contains an irony: he won a victory as an African-American only by denying that he was the candidate of African-Americans... Obama’s very success exacted a heavy cost on black politics…

His election undermined the very movement that made it possible… The social problems targeted by an earlier generation of black politicians—racial disparities in income and education, stratospheric incarceration and unemployment rates, rampant HIV in black communities—all persist, yet Obama’s election marginalized them.”
-- Excerpted from the book jacket

All you have to do is take a quick look at the black dropout, unemployment, health insurance and home foreclosure rates to know that the election of Barack Obama hasn’t transformed America into a post-racial paradise quite yet. What is even more troubling is the suggestion that the Age of Obama might actually have ushered in an era marked by a reversal of fortune for most African-Americans.

That’s precisely the case being made by Frederick C. Harris, a Professor of Political Science at Columbia University, in The Price of the Ticket: Barack Obama and the Rise and Decline of Black Politics. This groundbreaking book assesses the state of African-American affairs through the prism of a revised, 21st Century paradigm.

It is this author’s contention that “black voters have struck a bargain with Obama” whereby they feign satisfaction with his ignoring the African-American agenda in exchange for “the symbol of a black president and family in the White House.” And he concludes that a “dispiriting silence” is the price that the black community has had to pay as a consequence.

Unafraid of stepping on Obama’s toes, Professor Harris indicts the President for currying favor with whites by blaming poor blacks for their lot in life. For instance, he quotes this speech in which Obama describes poverty as resulting, in part, from moral failings: “Don’t tell me it doesn’t have a little to do with the fact that we have too many daddies not acting like daddies.”

In the end, the author wonders whether the sacrifices made by generations of African-American ancestors in the name of freedom and equality might have been in vain, if the President who’s finally led the people to the Promised Land could care less about delivering hope and change.

Read Oxford University Press’s description of The Price Of The Ticket: Barack Obama And The Rise And Decline Of Black Politics (Transgressing Boundaries: Studies In Black Politics And Black Communities).