Book Review: Wrong On Race: The Democratic Party’s Buried Past 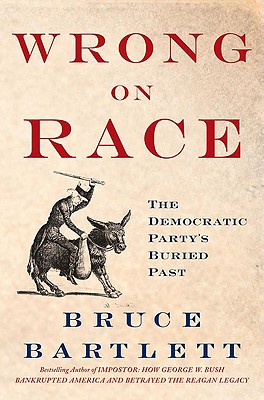 Read a Description of Wrong On Race: The Democratic Party’s Buried Past

’It must be acknowledged that in the progress of nations Negroes have shown less capacity for government than any other race of people. No independent government of any form has ever been successful in their hands. On the contrary, whenever they have been left to their own devices they have shown a constant tendency to relapse into barbarism’

Of all the dangers which our nation has yet encountered, none are equal to those which must result from the success of the effort now making to Africanize the half of our country.’
’President Andrew Johnson, State of the Union Address (1867)

Although the Democratic Party has come to be associated with liberal politics and thus embraced by African-Americans over the past 40 years or so, this hasn’t always been the case. In fact, for most of its history, the party created by Thomas Jefferson has been uniformly racist and right-wing.

Despite being famous for coining the phrase, ’All men are created equal,’ Jefferson also asserted that blacks ’are inferior to the whites in the endowments both of body and mind.’ The hypocritical third President of the United States went on to allege that ’They secrete less by the kidneys, and more by the glands of the skin, which gives them a very strong and disagreeable odor... They require less sleep’ They are more ardent after their female: but love seems with them to be more an eager desire, than a tender delicate mixture of sentiment and sensation’ In general’ they are dull, tasteless, and anomalous.’

This bigoted Founding Father is credited with formulating ’the most intense, extensive and extreme’ anti-black thought of the post-Revolutionary Era.’ So, it should come as no surprise that in his will he chose to free only 5 of his 200+ slaves after his death. Subsequent Democratic presidents were just as intolerant. For instance, plantation owner Andrew Jackson saw slavery as ’the necessary foundation’ of American civilization, if whites were to maintain their quality of life economically.

When James K. Polk took over the White House in 1845, he fired the existing domestic and kitchen staff and replaced them with slaves. Politically, Polk declared in his 1848 Statue of the Union Address that Congress had no power to end slavery. This attitude was later only rubber-stamped by fellow Democrat James Buchanan who, in 1857, hailed the Dred Scott Decision with, ’Had it been decided that either Congress or the territorial legislature possess the power to annul or impair the right to property in slaves, the evil would be intolerable.’

The very next year, during the famous Lincoln-Douglas debates, Democrat Stephen A. Douglas argued,

’I hold that a Negro is not and never ought to be a citizen of the United States. I hold that this government was made’ by the white men, for the benefit of white men and their posterity forever, and should be administered by white men and none others. I do not believe that the Almighty made the Negro capable of self-government’ In my opinion, the signers of the Declaration of Independence had no reference to whatever to the Negro when they declared all men to have been created equal’ thus, my friends, I am in favor of preserving the government on the white basis as our fathers made it.’

Many forget how Republican Abraham Lincoln's ill-advised choice of a Democrat as a running mate in 1864 gave John Wilkes Booth a good excuse to assassinate him For upon assuming the presidency, Andrew Johnson immediately began doing his best to ruin the Reconstruction effort by vetoing the Civil Rights Act and by repealing the Freedmen's Bureau legislation guaranteeing each ex-slave 40 acres and a mule.

Worse, he allowed the Southern states to pass the repressive Jim Crow laws prohibiting blacks from voting, holding office, marrying whites, and so forth. With African-Americans denied the vote, this signaled the demise of the Republican Party in the region, leading to the notion of the Solid South, meaning solidly Democratic. With no checks or balances, the next 100 years would be marked by widespread lynching, vigilantism and the rise of the Ku Klux Klan.

Speaking of the Klan, did you know that Harry Truman joined it in 1924? Wrong on Race: The Democratic Party's Buried Past by Bruce Bartlett is stocked with tons of such shocking tidbits. And while this illuminating tome might not make you shift your allegiance to the Republicans this election season, at the very least it ought to make you question the wisdom of remaining reflexively loyal to a party which has never officially apologized for its checkered past.

Read Bedford/St. Martin’s’s description of Wrong On Race: The Democratic Party’s Buried Past.