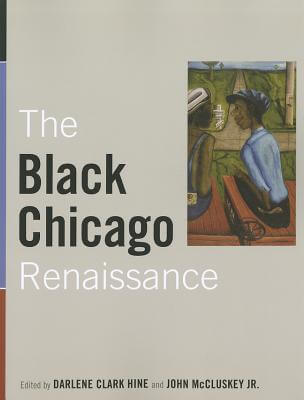 “Beginning in the 1930s and lasting into the 1950s, black Chicago experienced a cultural renaissance that rivaled and, some argued, exceeded the cultural outpouring in Harlem… However, [it] has yet to receive its full due. This volume addresses that neglect…

Black cultural artists in music and dance and in visual and literary arts demonstrated cognizance of the centrality of race and sex in the distribution of power, the ways in which the social construction of both interacted to determine social privileges and exclusions. The challenge was to deconstruct racial categories and rid ‘blackness’ of its negative symbolism.”
—Excerpted from the Introduction (pg. xv-xvi)

Since the Harlem Renaissance, New York has been considered the unofficial capital of black America. However, that designation might be undeserving when one reflects upon Chicago’s considerable contributions not only culturally, but socially and politically.

For example, the Windy City sent its first African-American to Congress sixteen years before the Big Apple which only elected Adam Clayton Powell, Jr. in 1944. Furthermore, half of the six black U.S. Senators in history represented Illinois, and I know I don’t have to tell you that President Obama hails from Chicago.

In terms of the arts, the city boasted such icons as novelist Richard Wright, choreographer Katherine Dunham, and poets Arna Bontemps, Margaret Walker and Gwendolyn Brooks during its heyday. What’s ironic is that at the very same time they were promoting positive images of African-Americans, Amos ‘n’ Andy, a minstrel radio show originating in Chicago, was doing just the opposite.

The white stars of that popular program did demeaning impersonations featuring “mispronounced words, garbled grammar and characterizations of black women as bossy and black men as clownish.” Meanwhile, A. Philip Randolph was organizing the Brotherhood of Sleeping Car Porters into a union to demand a living wage from the Chicago Pullman Car Company, “the single-largest employer of black people in the United States.”

An impressive history lesson and compendium of fascinating factoids proving that the so-called Second City need not take a back seat to New York, at least when discussing the achievements of its African-American intelligentsia.